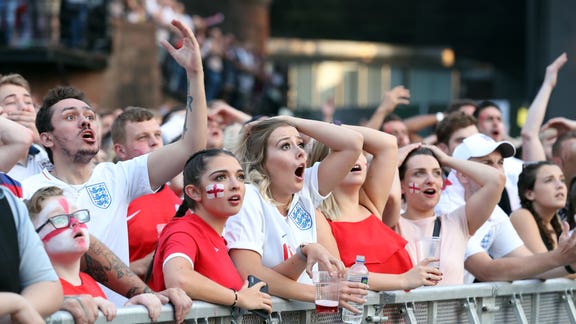 PATRIOTIC football fans are being warned they could face a £1,000 fine if caught flying a large England flag from their cars during the Euros.

It’s also bad news for motorists planning to adorn their vehicles with other team merchandise as they pray for glory on the pitch.

That’s because such items could obscure the driver’s vision and may mean they fall foul of motoring laws.

The tournament, which kicks-off this Friday (June 11), will see Europe’s best players do battle for one of the international game’s most glittering honours.

After reaching the World Cup semi-finals in 2018, expectations are high heading into the first tournament Gareth Southgate’s Three Lions will play on home soil – in part, at least – since Euro 96.

But showing your love for your team while on the road could be fraught with dangers.

The little-known rules have been highlighted by leading automotive outfit Select Car Leasing as fans gear up to watch Gareth Southgate’s side face Croatia in their opening game on Sunday.

The issues to consider about driving with flags attached to the car:

So, there’s no specific offence for driving with a flag attached to your car and most on sale are perfectly legal if fitted correctly.

But one that is particularly large and obscures the driver’s vision could risk convening Regulation 30 of The Road Vehicles (Construction and Use) Regulations 1986, which states motorists must have a full view of the road and traffic ahead.

A flag that could cause danger to pedestrians or other road users could fall foul of Regulation 53 of the same regulation, which also covers ‘mascot, emblems or other ornamental objects’ attached to motors.

The rule states mascots must not be positioned ‘where it is likely to strike any person with whom the vehicle may collide unless the mascot is not liable to cause injury’.

Breaking the rules could see drivers of cars or small vans slapped with a £1,000 fine.

Graham Conway, general manager of Select Car Leasing said: “With the Euros set to get underway this week, excitement is building.

“Especially as football fans have had to wait a year after the tournament was delayed by the Covid crisis.

“Showing your support with a flag, scarf or mascot won’t be a problem for most.

“But it’s important to make sure the driver’s vision is never impaired by anything you attach to your vehicle.

“Not only could it risk causing an accident, but it could also hit you in the pocket.

“If you’re planning on flying a flag or attaching a mascot to your motor, make sure it can’t pose a risk to you or anyone else.”