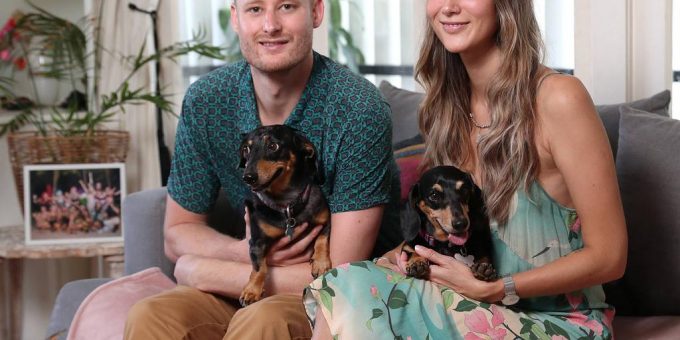 Rico and Holly Solo at the home they are renting. They buy tickets in prize home raffles as an alternative to saving for a house deposit. Picture: Peter Wallis.

WANNABE homeowners sick of saving for a deposit are resorting to gambling in a desperate bid to get a foot on the property ladder.

Charities have become major players in the Queensland property market — raising funds by buying homes to then raffle off as younger generations look for a shortcut to homeownership.

Prize homes accounted for $19 million worth of property transactions for just one charity last year, with an increase in the number of potential first home owners buying tickets to be in the running to win the great Australian dream.

This house at the Gold Coast was one of yourtown’s prize homes in 2019. Picture supplied.

And while a flashy beachfront residence is what you would traditionally expect from a prize house, charities are buying up different types of homes, including apartments and terraces in inner-city locations, to appeal to a wider demographic.

Yourtown head of marketing and fundraising Tracey Gillinder said the charity’s target audience was growing as many young families and young professionals felt the housing market was out of their financial reach.

“We’re finding a lot of younger people are finding out about us, and because we don’t have as many tickets, you’re chances of winning are way better compared to Lotto,” Ms Gillinder said.

“There’s never been a better time to win a house if you’re a young person starting out.”

This luxurious three-level apartment at 29/85 Bourke St, Woolloomooloo, was a prize home offered through the yourtown raffle. Picture supplied.

For $15 a ticket, yourtown offers punters the chance to win a dream home valued at millions of dollars in some of the best locations along the east coast of Australia.

RSL Art Union has 12 lotteries a year, 10 of which are prize homes, and have a prize pool worth more than $40 million this year.

“We’re definitely seeing a greater number of young people participating in the lottery, but it does vary depending on the prize,” Ms Bishop said.

“The more relevant to young people, the more who’ll participate.

This property at Lennox Head was part of a yourtown prize home package worth $1.68m.

“One of the games we do gives away an apartment in Melbourne, Brisbane and Sydney, and we usually see almost double the number of under 30s participate in that because it gives them the flexibility to live in one, sell one and rent one.

“In our research, young people are realising that prize homes have changed a lot in their profile and can now see that’s a real option for them.”

Ms Bishop said about 40 per cent of the properties they raffled off as prize homes were apartments.

“We aren’t just looking for a really nice home in the ‘burbs anymore,” she said.

“The most important thing is location, so we’re looking for beachfront and views.

“The most common things people look for are walk-in robes, view and lifestyle and the configuration of the house.”

This house at 16 Corsair Crescent, Sunrise Beach, was one of the RSL Art Union’s prize homes in 2019, valued at $2.7m. Picture supplied.

yourtown is also constantly on the lookout for top shelf luxury properties to raffle off in its 10 Luxury Art Union prize home draws each year.

The properties range from beach houses in places like Palm Beach to units overlooking Sydney Harbour.

“Seven times out of 10 auctions, we buy two properties and give our supporters a choice,” Ms Gillinder said.

“Whichever one isn’t chosen, we put back on the market.”

The view from the deck on one of the apartments on offer in Palm Beach in the RSL Art Union’s Golden Treasure prize draw.

Ms Gillinder said yourtown invested heavily in Queensland properties in response to their supporter base.

“Every single auction we had last year had a Queensland or northern NSW based offer,” she said.

“It’s a tree or sea change they’re looking for.”

Yourtown has already bought properties for auctions to be held up until the end of the financial year.

“We try to look a fair way ahead and to raise the most money, and we need the right type of house,” Ms Gillinder said.

This $3.5m beachfront apartment at Palm Beach was one of yourtown’s prize homes in 2019.

The Palm Beach apartment was styled by ‘The Block’ judge, Darren Palmer.

And the criteria is usually aspirational properties in areas of high real estate demand.

“The supporter requirements have changed dramatically with the advent of reno programs,” she said.

“People’s expectations are way up there. They want better than they have in their own home.

This house in Tallebudgera was one of yourtown’s prize homes in 2019. Picture supplied.

Brisbane couple Rico and Holly Solo have been renting for the past decade and seriously saving for a home deposit for two years.


“Historically, my parents used to buy the tickets, and me and my wife were looking at alternatives to saving for a house so we started looking at the odds of all the different art unions,” Mr Solo said.

“I mean, you’ve got to have your money where it can make a difference, and the chances (of securing a home) aren’t the same as saving up a deposit, but it is definitely a viable option.”

3 dead, 2 injured after shooting at Airbnb in downtown Toronto

Brexit done, Can we have those curry chefs now?