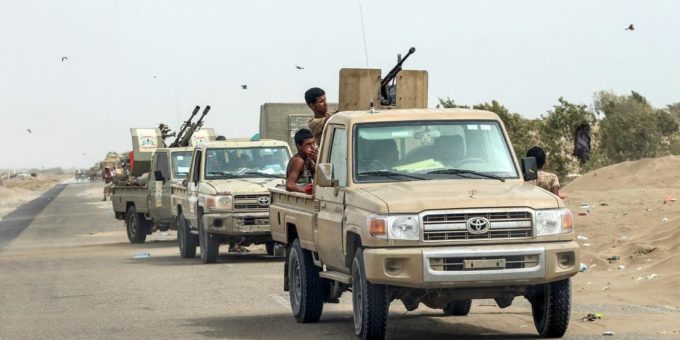 AL-MUKALLA: Yemeni civilians have been warned to avoid roads leading to the northern city of Haradh, a day after the Yemeni army launched an offensive to oust Houthi forces from the area.

The Coalition to Restore Legitimacy in Yemen is backing the Yemeni army’s efforts to liberate the strategic city from the Iran-backed Houthi militia.

Starting at 3 a.m. on Saturday, the coalition threatened to target vehicles on roads to Haradh and said the area is an operation site where Yemeni government troops are pushing to seize control of the city.

A coalition spokesperson was quoted by the Saudi Press Agency as saying that areas around Haradh are “within the area of operations and are being monitored round the clock, and any movements on these roads will be targeted.”

Troops called on Houthis who control the city’s downtown area to surrender.

“The national army liberated Al-Mehsam military base and the international road that links Hajjah with Hodeidah, and is now pushing toward the city’s downtown,” Majili said.

Starting at 3 a.m. on Saturday, the coalition threatened to target vehicles on roads to Haradh and said the area was an operational site.

Gains by government troops were first announced on Friday by Maj. Gen. Yahiya Salah, commander of the Yemeni army’s 5th military region, hours after the start of the Haradh offensive.

Military strikes in the northern province of Hajjah are part of the “Freedom of Happy Yemen” operation to liberate the country from the Houthis announced by Brig. Gen. Turki Al-Maliki in January.

Majili said the liberation of Haradh will allow government troops to push southward toward the port city of Hodeidah, secure Al-Tewal border crossing that links Yemen’s northern areas with Saudi Arabia, and help thousands of displaced people to return to their homes.

Local media reports said that the Houthis fired three ballistic missiles at government forces surrounding Haradh and planted land mines in a bid to stop troops from advancing into the city.

Government forces also made advances in the northern province of Saada, the Houthi heartland, seizing several locations and areas in Haydan district.

The Houthis suffered heavy casualties, while 13 militia vehicles were destroyed by coalition warplanes during the past 24 hours in the provinces of Hajjah and Marib, the coalition said in a statement.

Lata Mangeshkar dies at 92: Security tightened at Mumbai’s Shivaji Park ahead of funeral