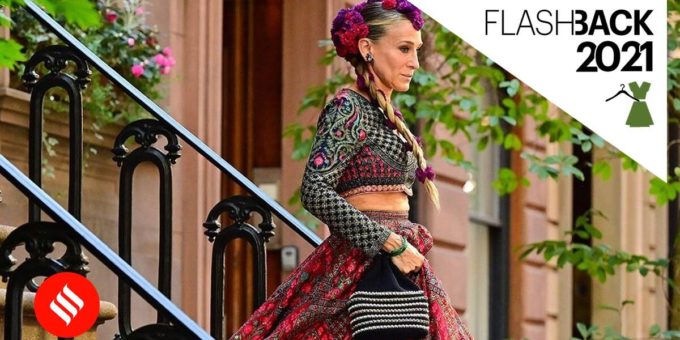 This year, the classic Indian traditional outfit, the lehenga, saw many creative and fashion forward iterations from Bollywood celebs. With designers reimagining the lehenga in modern colour palettes, silhouettes, and motifs, it has evolved from being just a skirt and a blouse set to something people can liberally experiment with.

While the backless choli remains one to rely on, there’s much more to the lehenga which has made even Sarah Jessica Parker’s Carrie Bradshaw a convert. From infinity blouse to thigh-high slit lehenga skirts, these are some of the most memorable lehenga looks of 2021:

Alia Bhatt gave us not one but two lehenga looks to love and take notes from, by two of the most celeb-approved designers of Bollywood — Manish Malhotra and Sabyasachi.

She wore a royal blue Sabyasachi number with a tie-back blouse for diwali while posing with beau Ranbir Kapoor, their first official couple picture on Instagram. Later, for her friend Akansha Ranjan’s sister Anushka Ranjan’s wedding ceremony with Aditya Seal, she sported a greenish-yellow chikankari lehenga set with the much-talked-about infinity blouse.

The newly-wed-bride, Katrina Kaif, set some bridal trousseau goals with the designs she chose to wear, all Sabyasachi, for her wedding with Vicky Kaushal. But earlier in the year, Kaif wore a voluminous floral print Sabyasachi lehenga, dupatta in a similar print, with a red full-sleeve blouse and contrasting emerald coloured drop earrings, styled by Ami Patel.

Janhvi Kapoor‘s look for a magazine cover is a lesson on how to modernise the lehenga for a banger of an outfit beyond traditional occasions. Her custom ecru lehenga had a thigh high slit which was the perfect reason to style it with a pair of knee-high nude leather boots. Her bralette-like choli is a multi-tasking piece that can be paired with jeans, trousers, or even skirts on various occasions.

Khushi Kapoor wowed us with this soft blue Anita Dongre lehenga that featured uneven, layered hems that looked like a piece of art. Her one-shoulder draped blouse in a bralette-imitating style completed the look that she styled with equally stunning earrings, and couture juttis.

Also a lehenga loyal, Kiara Advani sported a JJ Valaya lehenga set with a bold striped skirt and a sleek bralette brought together with a nude belt at the waist. This look is an example that you can also mix and match your bralette or crop top with a voluminous skirt to imitate a modern lehenga look which is multi-occasional and super stylish.

If you had told us that we would see Sarah Jessica Parker’s Carrie Bradshaw strut the streets of her beloved New York City in a custom gown with a floral headgear, we wouldn’t have believed you. But it happened.

For the reboot of Sex and the City, And Just Like That, the pictures of Bradshaw in a custom Falguni Shane Peacock lehenga with a cropped corset blouse went viral on the internet before the show released. Fans of the show and the iconic character were left divided on the verdict of this look, some loving the diversity while some touting it as OOTD and off character.