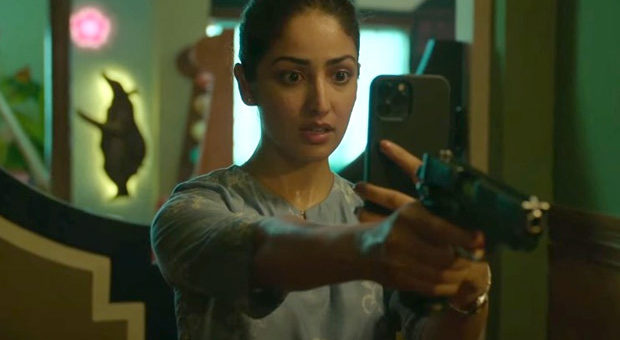 What happens when a cheerful kindergarten teacher draws a gun and holds the children hostage? A picture-perfect day takes a nefarious turn as the perpetrator puts innocent lives at risk. Loaded with suspense and unprecedented situations, A Thursday shall keep viewers stuck to their screens till the very end. Post a slew of blockbuster hits presented on the platform, Disney+ Hotstar is ready to enthrall viewers with A Thursday, a high-stakes hostage drama laced with suspense. Directed by Behzad Khambata, the movie has an ensemble star-cast headlined by Yami Gautam Dhar and veteran actor Dimple Kapadia, Neha Dhupia, Atul Kulkarni amongst others.

The story begins with a joyful backdrop of a kindergarten amidst giggles and innocent glee, when Naina Jaiswal (Yami Gautam Dhar), the teacher, suddenly takes her students hostage. Why has Naina taken such a drastic step? What is her final objective? A million questions to answer with little time to resolve as innocent lives are at stake. A narrative that explores the dark side of human nature, unpredictable turn of events, and secretive schemes. Directed by Behzad Khambata, the Disney+ Hotstar feature is produced by RSVP Movies & Blue Monkey Films and shall release on 17th February 2022 and will also be available on Hulu.

Yami Gautam Dhar will be seen in a completely distinct avatar in the movie with varying shades of emotions. Shedding light on different facets of human nature, the movie will take entertainment lovers through a labyrinth of unexpected twists and turns as shocking facts are unearthed about the motive behind the hostage situation. The complex and spellbinding story of A Thursday will have the audience constantly guessing what comes next.

Talking about the movie, director Behzad Khambata said, “A Thursday has truly been a unique experience. It explores a different subject and the narrative of the movie will hopefully keep people hooked – A hostage drama that not only dives into the mind of the perpetrator but also in the minds of the people who are resolving it and witnessing is, like the negotiator, the authorities and the people. The storyline shows characters battling with situations in distinct mannerisms. With superlative performances from Yami, Dimpleji, Atul sir, Neha, Karanvir, Maya and the entire team, it’s a complete entertainment package! Right from the casting to the script, a lot of thought has been invested while filming to provide a real world experience to viewers. Interspersed with sudden twists in the storyline, this film, I hope and pray, will be a memorable one”.


Actor Yami Gautam Dhar, who is playing the lead character of Naina Jaiswal, in the movie said, “I have never ever played such a distinct character like Naina! She projects so many diverse emotions. I have really put in a lot of effort to portray her in different shades. She is a teacher, who always looks after the children and she has taken them hostage, transforming her from a protector to a threat. That situation itself is so tense with multiple layers to it. A Thursday is an absolute roller coaster ride and I totally loved being a part of it!”

Actor Neha Dhupia, playing ACP Catherine Alvarez said, “When I first read the script, I immediately wanted to be a part of A Thursday. My role of a pregnant police officer is very unique as I am dealing with a hostage situation wherein children are involved and my character too will soon become a mother. I could relate to the character as I too have kids. The movie’s pace will keep viewers engaged to the last minute. The entire team has worked really hard and put together a thriller which will entertain one and all!”

Famed actor Dimple Kapadia shared, “It was wonderful to be a part of A Thursday. The suspense-led narrative of the script and finely etched characters makes this movie stand out in a distinct manner. My on-screen persona is in a bit of a conundrum with the hostage situation and how to resolve it. The movie’s storyline has ample moments of shock and awe which will definitely appeal to the viewers.”

Talented actor Atul Kulkarni shared, “I play the role of a police officer and the one who is trying to negotiate terms with Naina. People are going to be absolutely thrilled due to the suspense of the script and the sudden twists that shape the movie. The tussle between the authorities and the perpetrator is of another level as different facets come forward. The entire crew has done a fabulous job and we can’t wait for everyone to watch the film.”

Massive explosions in Beirut kill and wound many, cause extensive damage
2020-08-04