Breaking News
2022-05-23 Big Meetings For BJP, Opposition In Race To July Presidential Polls 2022-05-23 [Nadal cruises into French Open second round] 2022-05-23 Huma Qureshi recalls the first time she went to Cannes for the premier of Gangs of Wasseypur 2022-05-23 Kourtney Kardashian and Travis Barker Marry (Again) in Lavish Italian Wedding 2022-05-23 On IPL 2022 Playoffs Line-Up, Virender Sehwag Says He Couldn’t Have Predicted This 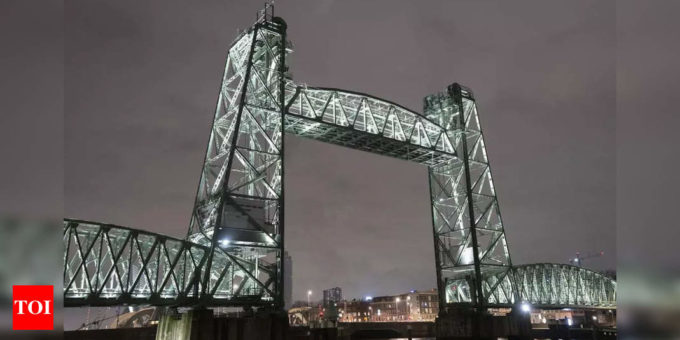 ROTTERDAM: A giant, $500 million yacht reportedly being built for Amazon founder Jeff Bezos faces a delivery problem: It may require dismantling a beloved, historic bridge in Rotterdam that is blocking its passage to the sea.
Reports this week that the Dutch city had already agreed to take apart the recently renovated Koningshaven Bridge, known locally as De Hef, sparked anger. On Facebook, locals are proposing to pelt the yacht with rotten eggs when it passes through.
However, a spokeswoman for Mayor Ahmed Aboutaleb told The Associated Press on Friday that while a shipbuilder has requested temporarily taking apart the bridge this summer, no permit has yet been sought or granted.
Many Rotterdam residents are still concerned.
“I think it’s easy to understand why it’s so controversial because this is a very beautiful, recently restored old bridge,” said Lizette Touber. “It really is our heritage. And I think that if the rich can pay for it to be opened, which normally nobody else could do, then you get controversy.”
In a written statement, Aboutaleb, who is on a visit to Colombia, said that once a request for a permit is submitted it will be assessed based on factors including economic impact, environmental nuisance and possible risks to the “monumental structure” of the bridge.
“When the permit has been applied for, the municipality can make a decision about this, details can be further elaborated and a plan can be made in the event of a positive decision,” the statement said.

(View of a yacht, reportedly being built for Amazon founder Jeff Bezos, on the wharf in Zwijndrecht, near Rotterdam.)
The municipality declined to comment on who owns the yacht in question or identify the shipbuilder. An email sent to Amazon seeking comment went unanswered. A report by Bloomberg in May 2021 said the yacht was being built for Bezos by Oceanco at a cost of “upwards of $500 million.”
The current Hef railway bridge was opened for trains to cross the Maas River in 1927 and taken out of service in 1993 when it was replaced by a tunnel. Public protests spared it from demolition and it eventually underwent a three-year renovation that ended in 2017. The middle section of the bridge can be raised to allow ships to pass underneath, but apparently not high enough for the new yacht’s masts.
Ton Wesselink, chairman of a Rotterdam historical society, feared that a decision to allow one yacht through the bridge could set a precedent for others.
“The thing we don’t want is that this yacht issue will open the possibility for shipbuilders to use it the same way,” he said in an email to AP.
But there were voices of support for the proposal.
“I think it’s fine. Let Bezos pay a high price. It creates work. I only see upsides,” said Rotterdam resident Ria van den Vousten.
“If it is paid for and everybody makes some money, don’t complain. Don’t talk, but act, as we say in Rotterdam,” she added.

India Covid-19: The children who have never seen a classroom