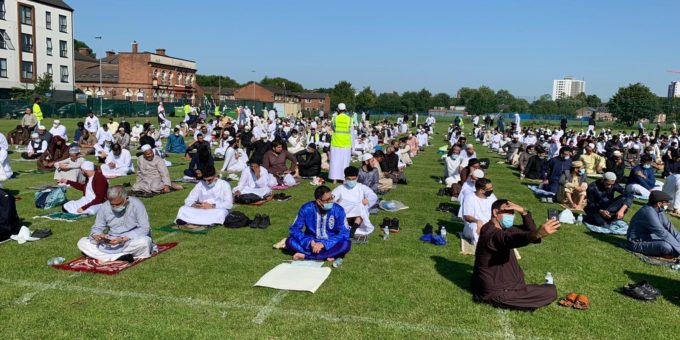 Images of Eid prayers which debunk a motorists claims that worshippers were not social distancing have been released.

The video believed to be filmed in Trafford on Friday (July 31) shows an irate driver pointing out that Muslims are not social distancing. But on closer inspection one can clearly see that each attendee is on their own prayer mat metres apart from one another.

The prayers were being held at St Brides Sports Ground, Old Trafford.

Excellent social distancing in the northwest of England, every culture is listening to Boris ? pic.twitter.com/iIEME9X3KO

Asian Image has been provided images of the Eid prayers which attracted Muslims from across the district which show worshippers clearly sitting in their designated spaces.

Some people have been quick to share images from angles which appear to show Muslims not social distancing. But on closer inspection volunteers can be seen marshalling the event and everyone has their own prayer mat.

Earlier this week we reported a picture being shared in Blackburn which seemed to suggest crowds of Muslims praying alongside one another in a mosque car park. Another image from a vantage shows the worshippers sat apart.