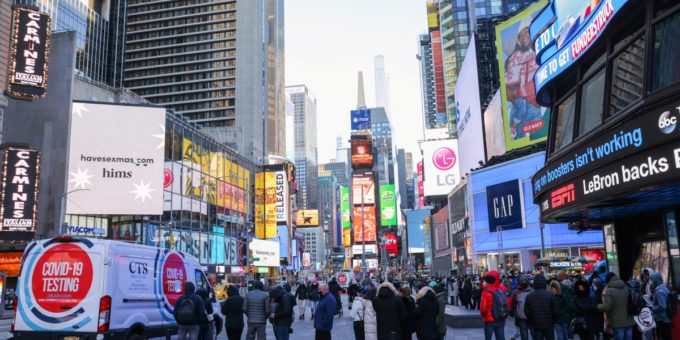 The number of daily new COVID-19 cases worldwide has crossed one million for the first time since infections were first recorded two years ago, according to a tally. The pandemic began in March 2020.

New infections in the United States have soared to their highest level on record, largely driven by the highly contagious Omicron coronavirus variant.

Australia also hit a new record on Thursday as it narrowed its definition of close contacts of coronavirus cases and relaxed requirements for COVID-19 tests, in a bid to relieve pressure on testing sites.

Meanwhile, the World Health Organization warned that the Omicron and Delta variants could produce a “tsunami” of COVID-19 cases that will put “immense pressure” on healthcare systems.

Here are the latest updates:

New York City will ring in 2022 in Times Square as planned despite record numbers of COVID-19 infections in the city and around the nation, Mayor Bill de Blasio said.

“We want to show that we’re moving forward, and we want to show the world that New York City is fighting our way through this,” de Blasio, whose last day in office is Friday, said on NBC’s “Today” show.

After banning revelers from Times Square a year ago due to the pandemic, city officials previously announced plans for a scaled-back New Year’s bash with smaller crowds and vaccinations required.

OPINION: Too many COVID-19 vaccine doses are being wasted

Since the Omicron variant of COVID-19 was detected, the stark global inequities that have characterised this pandemic have once again come to the forefront. From discriminatory travel bans to limited access to vaccines, African countries are bearing the burden of this inequity.

Almost one year after vaccine rollout began, donations of COVID-19 vaccine doses by wealthy countries that no longer need them are getting ramped up. But many of the donations are due to expire shortly.

This leaves African countries to reluctantly reject these much-needed vaccines or try to increase vaccine uptake rapidly, despite the challenges that may entail and the pressure it puts on healthcare systems that are already stretched to the limit.

More than 7.3 million new COVID-19 cases were detected around the world in the last seven days, an average of 1,045,000 infections every day, according to a tally by news agency AFP.

The figures for 23-29 December, the highest since the virus first emerged at the end of 2019, are based on tolls given daily by health authorities in each country.

More than 85 percent of the new infections occurred in two regions worst hit by Omicron — Europe, which recorded 4,022,000 cases in the last seven days, up 36 percent over the preceding week, and the United States and Canada which had a combined 2,264,000 cases in the same period, up 83 percent.

The number of confirmed cases of the coronavirus in the Barcelona squad swelled to 10 on Thursday, potentially jeopardising the team’s return to league play after Spain’s winter break of nearly two weeks.

Sergiño Dest, Philippe Coutinho and Abde Ezzalzouli are the latest players to contract COVID-19, Barcelona said. They are self-isolating at home and the team said they were “in good health”.

Martti Ahtisaari, Finland’s former president and Nobel Peace Prize winner, has been hospitalised after testing positive for COVID-19 for a second time, his foundation said on Thursday.

“President Ahtisaari is doing well under the circumstances, but is being treated in hospital,” the Martti Ahtisaari Peace Foundation said.

The 84-year-old former mediator was awarded the prestigious peace prize in 2008 for his work to end conflicts. He was president of Finland from 1994 until 2000, and announced his withdrawal from public life in September after being diagnosed with Alzheimer’s disease.

He first contracted the coronavirus in March 2020.

New Year’s parties and gatherings of more than four people in public places have been banned in the Indian city of Mumbai, officials said on Thursday.

Gatherings of four or more people will be banned until January 7, under Section 144 of the Indian penal code.

No rules had been specified for house parties, but Mumbai’s governing civic body has appealed to citizens to be cautious and responsible.

England is building temporary structures at hospitals around the country to prepare for a surge of COVID-19 patients as the Omicron coronavirus variant fuels a new wave of infections.

The National Health Service (NHS) said on Thursday it will begin setting up “surge hubs” this week at eight hospitals, each with the capacity to treat about 100 patients. Staff are preparing plans to create as many as 4,000 “super surge” beds should they be needed.

French officials on Thursday decried an act of vandalism committed against a ruling party politician by suspected anti-vaccination protesters in Chambly, north of Paris.

The house of Pascal Bois, an MP for President Emmanuel Macron’s ruling LREM party, was targeted overnight between Tuesday and Wednesday.

The garage was set on fire and an adjacent wall spray-painted with phrases including “Vote No”.

“Such criminal acts of intimidation are not acceptable in a democracy,” Interior Minister Gerald Darmanin said on his Twitter account on Thursday, adding that police had opened an investigation.

Xi’an residents complain of food shortages as lockdown drags on

Residents in the locked-down Chinese city of Xi’an have told AFP they were struggling to find enough food, despite Beijing insisting that there were now adequate supplies.

All 13 million residents of Xi’an were placed under lockdown eight days ago. Initially, one resident was allowed out every two days to stock up on supplies. This was then reduced to every three days, before residents were no longer allowed out.

State TV showed footage of workers in hazmat suits sorting eggs, meat and vegetables, before delivering food to residents door to door. AFP received complaints that the supplies were low and the vegetables were not fresh.

Local officials admitted that there had been trouble providing essential supplies. But commerce ministry spokesman Gao Feng said at a press briefing on Thursday that “the total supply of daily necessities in Xi’an is sufficient.”

Masks to be mandatory outdoors in Paris

Residents and tourists in Paris will be required to wear face masks outdoors starting from Friday as France this week reported a daily record of 208,000 new COVID-19 cases.

The Paris police prefecture said the mask rule will apply to people aged 12 and over, although individuals will be except while riding bicycles or motorcycles, travelling in vehicles and doing exercise.

Masks already are mandatory in shops, public facilities and office buildings and on public transportation in France.

Italy approved a new decree on Thursday restricting access to an array of public places to people who are unvaccinated or whose second vaccination took place more than 120 days ago.

The measures, which will be enforced from January 10, will restrict access to hotels, congress centres, local and long-distance public transport, ski lifts and festivals, among other places.

The new rules will stay in place until the end of the state of emergency on March 31.

In the decree, the government also decided to suspend precautionary quarantine for people who were vaccinated or recovered from COVID-19 and who had close contact with a person who had tested positive.

The study, which has not been peer-reviewed, was based on a second dose of the J&J vaccine administered to 69,092 healthcare workers between November 15 and December 20.

The trial has been evaluating the efficacy of the J&J vaccine in the field after it was temporarily suspended due to concerns over extremely rare cases of blood clots.

US cases soar to highest levels ever

New COVID-19 infections in the US have reached their highest level on record, at more than 265,000 per day on average.

The number of new daily cases has more than doubled over the past two weeks, eclipsing the old mark of 250,000 set in mid-January, according to data kept by Johns Hopkins University.

Omicron has cast a pall over the Christmas and New Year’s holidays, forcing communities to scale back or call off their festivities.

Dr Anthony Fauci, the top US infectious disease expert, said that there is no need to cancel small home gatherings for those who have received two or three vaccine doses.

Australia has hit a new record, with daily cases topping 20,000 for the first time in the pandemic.

This came as the government narrowed its definition of “close contacts” of coronavirus cases as people who live in the same household with an infected person. They would have to isolate for seven days and would only have to get a PCR test if they have COVID-19 symptoms.

The rules are being relaxed to stop asymptomatic people from being forced into isolation, especially in healthcare, hospitality and airlines, and cut long lines of people forced to get PCR tests for interstate travel or because they have been at a public site with a confirmed case.

The country’s medical association criticised the government’s redefinition of close contacts, saying it would further accelerate the outbreak.