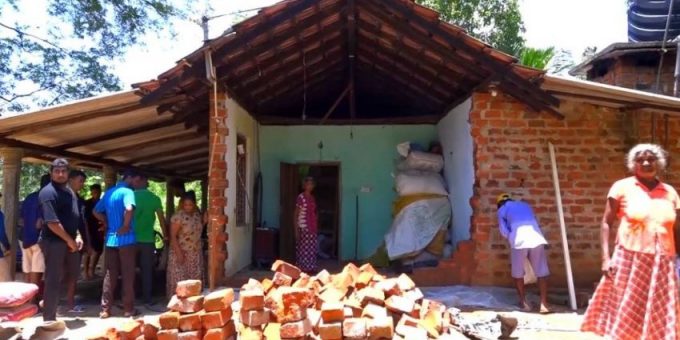 COLOMBO (News1st): Villagers of Mahiyanganaya spent their nights in fear, unlike the rest of their fellow citizens who celebrated the dawn of the New Year across the country.

A mother, living with her son, narrowly missed the jaws of death as a wild elephant damaged their home for the third time.

In what seemed to be a glimmer of hope, the youth in the village have come forward to reconstruct the damaged house.

According to eyewitnesses, the wild elephant had attacked the door of the house, after its attempts to obtain paddy had been obstructed by iron rods in the vicinity.

“When the wildlife minister assumed duties, he said that the human-elephant conflict would be resolved in two years. We don’t know where he is at present,” a villager said.

“His words have not materialized”.

Nine houses in the Rambukyaya village were destroyed by wild elephants recently. Wild elephants that visit the Sorabora Wewa from the Maduru Oya encroach into these villages, leaving families in despair.

Are further delays essential to address the problems of these people?