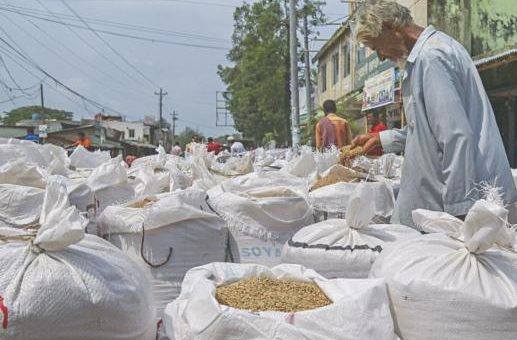 Amid the extreme suffering of farmers caused by the low price for paddy, the government has said that it can do nothing about it.

There is now a surplus of rice reserve in the country and there was a bumper harvest of boro this year—as a result, prices are almost half the cost of production.

Even after this, 200,000 tonnes of rice were imported through government and private channels over the past 10 months. And 380,000 tonnes are in the import pipeline.

The suffering of farmers was worsened by a manpower crisis for harvesting paddy in the fields and high cost of labour—along with the bumper harvest and low price of paddy in the local market. And this even led to a frustrated farmer recently setting fire to his field.

If the farmers lose out in such a big way, will they be encouraged to farm paddy in the coming years to feed the more than 16 crore people in our country? When everyone is talking about what farmers are going through in Bangladesh, there is a good example of how farmers can be saved from such ordeals just next door in West Bengal.

However, before looking at that, it is important to remember that India is one of the largest rice producers in the world. And the Indian government has given a number of incentives to its farmers over the years to protect them. Yet, it was only recently that farmers were marching towards Delhi in protest. And according to Indian government statistics, a total of 36,320 farmers committed suicide between 2014-16. Which means that every day, 33 farmers committed suicide in India during that period. Whereas Bangladeshi farmers, in comparison, are in a very good position. Even though newspaper reports suggest that the reason behind farmer suicide in India was quite unique—droughts, bad weather, water crisis were among the main reasons. And farmers not getting fair prices for their products has been a rarity there.

Nevertheless, India has a “Commission for Agricultural Costs and Prices (CACP)”, which is an organisation under the agricultural ministry that advises the government on Minimum Support Price (MSP) for Kharif and Rabi seasons to incentivise farmers and ensure adequate food grain is produced in the country. Minimum Support Price is the price at which the government purchase crops from farmers. And is an important part of India’s agricultural pricing policy.

As of now, the CACP recommends MSPs of 23 commodities and the price is announced at the beginning of the sowing season of the crops.

The Indian government adopted this system after the food shortage of the mid 1960’s. In the CACP committee, there are two representatives from among the farmers who also play a direct role in fixing price of agricultural products.

According to media reports, in the current Boro season, the West Bengal government had aimed to procure 52 lakh tonnes of paddy out of a total production of 2.5 crore tones in the state. The State has allocated around 8,500 crore rupees for paddy procurement. The minimum support price (MSP) announced by the authorities for paddy this season is 1,750 rupees a quintal, when the market price is at 1,450-1,500 rupees. The West Bengal government also said it could go for higher procurement as the market price is low.

Now, we can look back at what is happening here in Bangladesh.

If the government of West Bengal can protect the interest of its farmers, then why can’t the government of Bangladesh? It is time for our policymakers to consider forming a commission similar to the Indian CACP—comprising of representatives from farmers to protect them.

Recently, there was a post that went viral on social media. In it was a picture of a slogan written on the T-shirt of a rickshaw puller, which was, “Korbo na ar dhan chash, dekhbo tora ki khash” (We will not cultivate paddy anymore, and then we will see what you eat).

This is not a mere slogan, but is an indirect threat and a dangerous indication. Today, it may be the farmers who are suffering. But if we remain inactive in the face of it, then it will be us who will be the sufferers in the days ahead. If farmers lost interests in growing rice for sale and did so only for their own consumption, then it’s us who would be its worst victims. That’s why we should be careful and act before it’s too late.