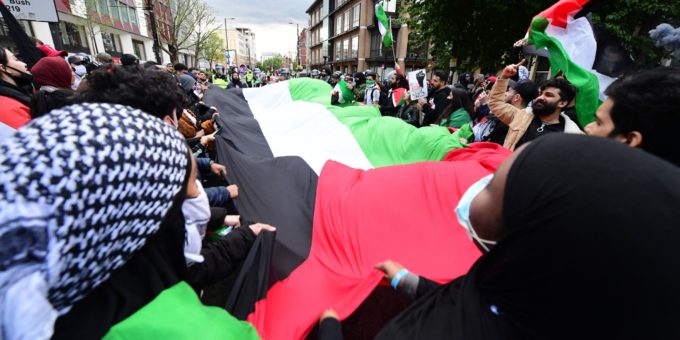 Amnesty International has joined Human Rights Watch and the Israeli human rights group, B’Tselem, in condemning Israel’s policies towards the Palestinians and in the Occupied Palestinian Territories (OPT) as Apartheid.

The nearly 300 page Amnesty report, compiled over a period of four years, documents how “massive seizure of Palestinian land and property, unlawful killings, forcible transfer, drastic movement restrictions and the denial of nationality and citizenship to Palestinians are all components of a system which amounts to Apartheid under international law.”

Agnès Callamard, Amnesty International’s Secretary General said: “Our report reveals the true extent of Israel’s apartheid regime. Whether they live in Gaza, East Jerusalem and the rest of the West Bank, or Israel itself, Palestinians are treated as an inferior racial group and systematically deprived of their rights.

“We found that Israel’s cruel policies of segregation, dispossession and exclusion across all territories under its control clearly amount to apartheid. The international community has an obligation to act.”

She continued that for Palestinians, the difficulty of travelling within and in and out of the OPT ‘is a constant reminder of their powerlessness.’ Their every move is subject to the Israeli military’s approval and the simplest daily task means navigating ‘a web of violent control.’

Amnesty International added: “There is no possible justification for a system built around the institutionalised and prolonged racist oppression of millions of people. Apartheid has no place in our world, and states which choose to make allowances for Israel will find themselves on the wrong side of history.”

In a response to the report, an Israeli foreign ministry spokesperson stated that the State of Israel rejects all the allegations and accused Amnesty of ‘anti Semitism.’

“The report consolidates and recycles lies, inconsistencies, and unfounded assertions that originate from well-known anti-Israeli hate organisations, all with the aim of reselling damaged goods in new packaging.

“Repeating the same lies of hate organisations over and over does not make the lies reality, but rather makes Amnesty illegitimate,” added the spokesperson.

Israeli Minister of Foreign Affairs Yair Lapid said: “Amnesty was once an esteemed organisation that we all respected. Today, it is the exact opposite. It is not a human rights organisation, but just another radical organisation that echoes propaganda with no serious examination.

“Amnesty does not call Syria an ‘apartheid state’ – a country whose government murdered half a million of its own citizens – nor Iran or any other corrupt and murderous regime in Africa or Latin America. I hate to use the argument that if Israel were not a Jewish state, nobody in Amnesty would dare argue against it, but in this case, there is no other possibility.”

The Palestinian Authority has said it hopes to prosecute Israel at the international criminal court for ‘war crimes.’

The statement from the Palestinian foreign ministry continues: “The report is a detailed affirmation of the cruel reality of entrenched racism, exclusion, oppression, colonialism, apartheid, and attempted erasure that the Palestinian people have endured since the Nakba (catastrophe). It is a reality in which the State is structured to maintain Jewish Israeli domination by ensuring the perpetual denial of the fundamental and national rights of the Palestinian people.

“Allowing this wholesale and institutionalised brutalisation and dehumanisation of the Palestinian people to continue without consequence is a betrayal of the values and principles of universal human rights. Such a betrayal would also negatively impact the rights and lives of victims of injustice around the world. This would undermine the global fight for justice and universal application of human rights. It would be simply inexcusable.”

Apartheid is a regime of oppression and domination by one racial group over another as was the case in South Africa and is viewed to be a serious human rights violation which is prohibited under international law. It was introduced in South Africa in 1948 by the Afrikaner-led National Party government who enforced racial segregation between white and black citizens but was scrapped in 1994 with the election of Nelson Mandela after much national and international pressure.

Mandela spent 27 years in prison for his campaign for equality and an end to Apartheid and was viewed as a terrorist by the racist South African regime.

More than 600,000 Israelis live in around 140 illegal settlements in the West Bank and East Jerusalem.

The renowned professor of history Ilan Pappe said: “This is a highly important announcement, even though it is only a small step toward change in the way the international community relates to Palestine.

“We know the civil society refers to Israel as an Apartheid state but will the governments of the world follow suit?

The report can be read here

Sask. woman survives 14-hour ordeal in swirling blizzard with help from nearby stranger

Hadiqa Kiani Shares The Most Strange Accusation Against Her