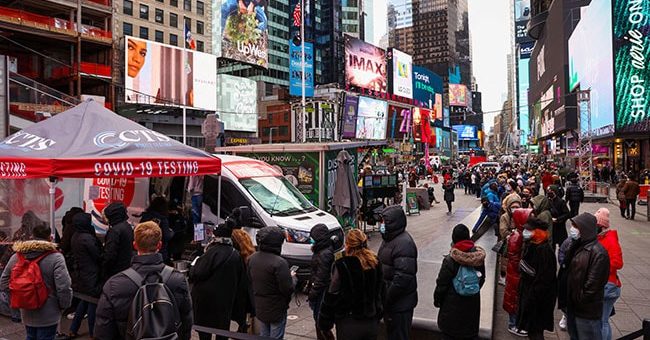 Covid In Europe: WHO said that Omicron is spreading faster than the Delta variant.

The World Health Organization’s European head on Tuesday warned countries to brace for a “significant surge” in COVID-19 cases as Omicron spreads, and advised the widespread use of boosters for protection.

Since it emerged in late November, Omicron has been detected in at least 38 of the 53 countries in the WHO’s European region and is already dominant in several of them including Denmark, Portugal and the United Kingdom, Hans Kluge told a news conference in Vienna.

“We can see another storm coming,” said Kluge. “Within weeks, Omicron will dominate in more countries of the region, pushing already stretched health systems further to the brink.”

The WHO’s Europe region includes Russia and other former Soviet republics, as well as Turkey.

WHO data shows the region has in recent weeks reported the highest number of COVID-19 cases compared to the population size anywhere. Even before Omicron, officials had warned of a further 700,000 deaths from the disease by March.

WHO headquarters in Geneva has advised that vaccine boosters be saved for the most vulnerable, but Kluge urged people to “boost, boost, boost.”

“The booster is the single most important defence against Omicron,” he said.

A WHO spokesperson did not immediately respond to a request to comment on Kluge’s remarks.

So far, 89% of the early Omicron cases in Europe were associated with common COVID-19 symptoms such as cough, sore throat and fever, Kluge said. Most cases had been reported among adults in their 20s and 30s, spreading initially in cities at social and workplace gatherings, he added.

“The sheer volume of new COVID-19 infections could lead to more hospitalizations and widespread disruption to health systems and other critical services,” he said.

“Governments and authorities need to prepare our response systems for a significant surge.”

The WHO said on Monday that Omicron is spreading faster than the Delta variant, causing infections in people already vaccinated or recovered from the disease. Its chief scientist has called it “unwise” to conclude from early evidence it is a milder variant than previous ones.

Shehnaaz Gill poses with Lucifer in new poster, fans say ‘It will be fab’

If rain spoils your vacation, this Italian island will give hotel refunds
2019-05-21