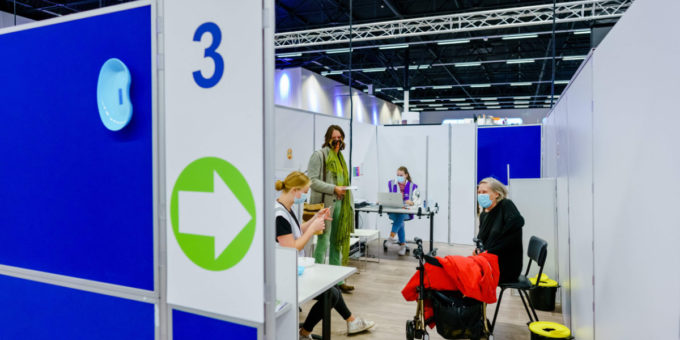 CAIRO/BEIRUT: World health chiefs issued a new warning on Saturday over the threat posed by the omicron coronavirus variant, as Egypt recorded its first cases of the strain and Lebanon imposed a curfew on non-vaccinated people.

Omicron has been reported in 89 countries and the number of cases is doubling in one-and-a-half to three days, the World Health Organization said.

The variant is spreading rapidly in countries with high levels of immunity, but it is not known if this is because of its ability to evade immunity, its inherent increased transmissibility or a combination of both, the agency said. “There is still limited data on the clinical severity of omicron,” the WHO said.

“More data is needed to understand the severity profile and how severity is impacted by vaccination and existing immunity. There is still no peer-reviewed evidence of vaccine efficacy for omicron.”

The WHO warned that hospitals in some countries could not cope.

“Hospital admissions in the UK and South Africa continue to rise, and given rapidly increasing case counts, it is possible that many healthcare systems may become quickly overwhelmed.”

In the US, fears are growing in New York of a return to the nightmare of 2020, when the city was the global center of the pandemic. “Omicron happened,” New York Mayor Bill de Blasio said.

“And we got to be honest about the fact that it’s moving very fast and we have to move faster,” he added. In Europe, edgy governments are bringing back restrictions to fight the pandemic, which has killed more than 5 million people since the outbreak emerged in China in December 2019.

Paris canceled its annual New Year fireworks, EU chief Ursula von der Leyen warned that omicron could be the dominant variant in Europe by mid-January, Ireland is ordering bars and restaurants to close at 8 p.m., Denmark is shutting cinemas and other venues and London Mayor Sadiq Khan declared a “major incident” to allow institutions more leeway in tackling the upsurge.

Egypt recorded its first three cases of omicron on Saturday, at the height of the economically vital tourist season. Three Egyptians tested positive on their return from overseas, the Health Ministry said. The tourism sector, which suffered under global lockdowns for the past two years, had just started to recover and was counting on end-of-year visitors.

Lebanon has recorded 60 cases of omicron, but Health Minister Firass Abiad said it was “rapidly spreading … two-and-a-half times faster than the delta variant.”

Security services have imposed a three-week 5 p.m. to 6 a.m. curfew for unvaccinated residents, with fines for those who break it.