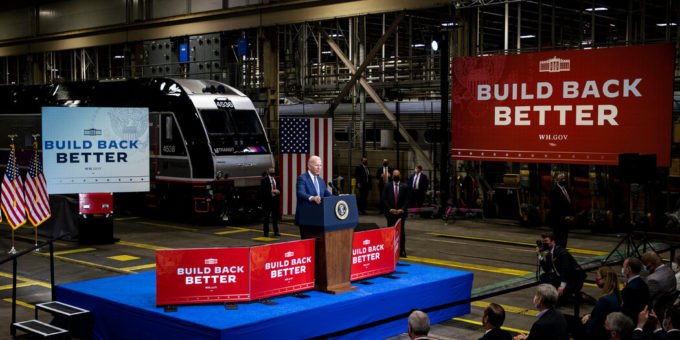 As Democrats unveiled a plan to tax America’s billionaires as a way to help fund their sprawling domestic policy measure, party leaders and White House officials were racing on Wednesday to resolve a number of key disagreements and secure a deal before President Biden leaves for a series of global conferences.

The latest revenue proposal, which was endorsed by Senator Kyrsten Sinema of Arizona, a key centrist holdout on many of the original tax increases, offered a glimmer of hope that Democrats were coming closer to a final agreement. But a number of issues remain for the party, including the inclusion of a federal paid and medical leave program, a push to expand health care benefits, and how to fully pay for the package.

White House officials were scheduled to meet with Ms. Sinema and Senator Joe Manchin III of West Virginia on Capitol Hill at 10:30 a.m., according to a person familiar with the plan, after the two centrist holdouts met privately with Mr. Biden at the White House on Tuesday evening. An administration official said the evening meeting yielded progress but did not offer specifics.

Mr. Biden, who is set to leave Thursday for a trip to Rome for the Group of 20 summit and then a United Nations climate conference in Glasgow, hopes to use the plan as evidence of an American commitment to combating climate change as he pushes for a stronger global response.

White House officials and party leaders have already agreed to significantly whittle down the initial $3.5 trillion budget blueprint Democrats muscled through this year, and the package is now expected to be roughly half its original size.

Top Democrats hope that a compromise on the plan, which is now expected to spend up to $1.75 trillion to address climate change, universal prekindergarten, health care benefits and federal support for child care and home care, could also help pave the way for a House vote on a Senate-passed $1 trillion bipartisan infrastructure package. Liberals have repeatedly refused to support that package until after a vote on the far more expansive plan, which Mr. Biden has named the Build Back Better bill.

In a private meeting with her top deputies, Speaker Nancy Pelosi promised that “in the next couple of hours, I will be communicating with you on our path from here to there,” according to a person familiar with the remarks, who disclosed them on condition of anonymity.

Those steps, she added, would be determined “depending on what happens at the White House.” But she acknowledged that for the infrastructure bill to pass, “we need to have the trust, the confidence and the reality of the Build Back Better bill.”

Because Republicans are unanimously opposed to the domestic policy measure, Democrats must keep all 50 senators and all but three House members in their caucus on board with the legislation. That has proved to be a fraught endeavor, particularly as the party uses an arcane budget process known as reconciliation that shields the package from a filibuster.

Senate Democrats plan to tax the richest of the rich, hoping to extract hundreds of billions of dollars from the mountains of wealth that billionaires sit on to help pay for their social safety net and climate change policies.

The billionaires tax would almost certainly face court challenges, but given the blockade on more conventional tax rate increases imposed by Senator Kyrsten Sinema of Arizona, Democrats have few other options for financing their domestic agenda.

It would for the first time tax billionaires on the unrealized gains in the value of their liquid assets, such as stocks, bonds and cash, which can grow for years as vast capital stores that can be borrowed off to live virtually income tax free.

The tax would be levied on anyone with more than $1 billion in assets or more than $100 million in income for three consecutive years — about 700 people in the United States. Initially, the legislation would impose the capital gains tax — 23.8 percent — on the gain in value of billionaires’ tradable assets, such as stocks, bonds and cash, based on the original price of those assets.

For men like the Facebook founder Mark Zuckerberg, the Amazon founder Jeff Bezos and the Tesla founder Elon Musk, that hit would be enormous, since the initial value of their horde of stocks was zero. They would have five years to pay that sum.

After that, those billionaires would face an annual capital gains tax on the increase in value of their tradable assets over the course of the year.

Democrats say the billionaires tax could be one of the most politically popular elements of their social safety net and climate change bill, which is expected to cost at least $1.5 trillion and could be completed as soon as Wednesday.

But implementation could be tricky. Billionaires have avoided taxation by paying themselves very low salaries while amassing fortunes in stocks and other assets. They then borrow off those assets to finance their lifestyles, rather than selling the assets and paying capital gains taxes.

The plan faces resistance from some Democrats who worry that it may not be feasible and could be vulnerable to legal and constitutional challenges. The Constitution gives Congress broad powers to impose taxes, but says “direct taxes” — a term without clear definition — should be apportioned among the states so that each state’s residents pay a share equal to the share of the state’s population.

The 16th Amendment clarified that income taxes do not have to be apportioned, and proponents of the billionaires tax have been careful to portray it as a tax on income, not wealth.

If something about this week’s frantic negotiations over President Biden’s domestic agenda seems achingly familiar, there’s a good reason.

Democrats went through the same painful dance — a legislative deadline, a marathon round of private talks with centrist holdouts, ultimatums from progressives — just a month ago, emerging without a deal and punting until this month.

All the same elements are in place now as Mr. Biden and top Democrats toil to strike a compromise that will allow their sprawling social policy, climate and tax increase bill and a separate, $1 trillion bipartisan infrastructure bill to move forward.

First, there is a hard deadline for approving the infrastructure measure before federal highway programs lapse on Sunday, which could force the furlough of thousands of Department of Transportation workers and shut down public works projects.

Then there are the ongoing, round-the-clock talks to entice two Democratic senators, Joe Manchin III of West Virginia and Kyrsten Sinema of Arizona, into the party fold on the broader domestic policy bill.

And of course, there are progressives in the House growing increasingly uneasy as they see some of their priorities being slashed or left on the cutting room floor. Trying to flex their recently developed muscle, some progressives want a House vote on final legislative language on the social safety net bill before agreeing to vote for the infrastructure measure.

It has all conjured up an eerie sense of déjà vu among Democrats on Capitol Hill, where lawmakers and aides remember all too well the last week of September, when they failed to get either an agreement on the safety net legislation or a floor vote on the infrastructure plan, setting up this repeat performance.

Given the political forces at play, the outcome could be the same this time. But Democrats believe there are some distinctions. They say they are further along in the talks with the two reluctant Senate Democrats and have narrowed their differences, putting them closer to a final agreement.

And while progressives are unhappy with the scaled-down scope of the plan — which some of them initially wanted to total $6 trillion and is now in the neighborhood of $1.75 trillion — many of them have accepted the political reality that a costlier bill cannot squeak through a Congress where Democratic majorities are so slim.

Time pressure is also mounting. Democrats would dearly like to pass the infrastructure measure before the highway program expires on Halloween. It would not only avert a disruption, but could help the Democratic candidate, Terry McAuliffe, in the tight Virginia governor’s race next week.

Democrats also want to send Mr. Biden to climate talks in Scotland next week with new programs to curb emissions firmly in hand. And they would like to end the unsightly sausage-making that is going on so they can start selling the benefits of the measures to those who could gain from them, rather than keeping the focus on what is being jettisoned.

Speaker Nancy Pelosi was hard at work Tuesday morning trying to keep the pressure on.

“There’s not that much more time,” Ms. Pelosi said as she left a private party meeting. “We have to have decisions largely today, a little bit into tomorrow, so we can proceed.”

Of course, something about that sounds familiar as well.

The budget reconciliation process allows Congress to advance certain spending and tax bills on a simple majority vote, freeing lawmakers in the Senate from the 60-vote threshold most legislation must meet to be considered. Democrats are aiming to use the process to pass their sweeping social safety net and climate change measure, which carries much of President Biden’s agenda, in the face of united Republican opposition.

The process begins with a budget resolution, which establishes a blueprint for federal spending and directs congressional committees to write bills to achieve certain policy results, setting spending and revenue over a certain amount of time. Its name refers to the process of reconciling existing laws with those directives. Here are some key things to know about the legislative maneuver.

There are strict rules on what can be included.

While reconciliation allows senators to scale procedural and scheduling hurdles, it is also subject to strict limits that could constrain any package Democrats seek to pass.

In the Senate, the “Byrd Rule,” established by former Senator Robert Byrd of West Virginia, bars extraneous provisions — including any measure that does not change revenue or spending, that affects the Social Security program or that increases the deficit after a period of time set in the budget resolution. It is intended to ensure that the reconciliation process cannot be abused to jam through unrelated policies.

The rule’s name lends itself to a number of bird-related puns commonly used to describe the stages of the process. There is the “Byrd bath,” when the Senate parliamentarian scrubs and analyzes a bill for any provision that violates the rule if a senator raises a concern about a violation. Anything that does not survive the scrutiny is known as a “Byrd dropping” and is removed from the legislation.

Vice President Kamala Harris could overrule the parliamentarian, but that has not been done since 1975.

The legislative math is proving tough for Democrats.

A budget blueprint was advanced in August and committees have been working on drafting the reconciliation legislation, but centrist Democrats in the Senate who have balked at the $3.5 trillion price tag have created an impasse as party leaders try to negotiate a compromise.

Because Republicans have made it clear they are unified in their opposition, Democrats cannot afford to lose even one vote from their party in the Senate. In the House, the math is almost as challenging: If every representative voted, Democrats could afford to lose only three of their members.