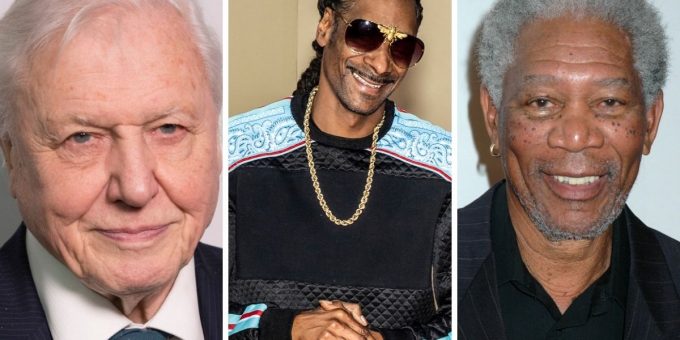 It seems these celebrities help us fall asleep whilst listening to music, celebrity podcasts and audiobooks.

Standing as the celebrity with the most soothing voice to fall asleep to is the national treasure Sir David Attenborough, receiving 89% of votes. according to a survey by TheDozyOwl.

Sleep expert Alex Ion from TheDozyOwl said: “Positive feelings are stimulated by our senses – one of which is sound. Hearing a voice that carries a benevolent and trustworthy authority makes you feel comforted and relaxed. Such positive stimulation will reduce the amount of cortisol (aka. The Stress Hormone) being produced in your brain allowing you to fall asleep faster.

“Alongside this, Attenborough speaks slowly and concisely, elongating his words and maintaining a soft and raspy tone. Such tone and tempo relaxes rather than stimulates, helping you unwind.”

Following closely behind in second place is American rapper and personality Snoop Dogg, with 83% of the voters naming him the celebrity with the most soothing voice to fall asleep to.

Alex Ion said: “Snoop Dogg is known for his soft and relaxed vocal delivery which distinguishes his rap style from many, tying him to soul vocalists. This delivery combined with his typically slow tempo generally has a calming effect making both his music and podcast great to fall asleep too.”

The voice of God, Morgan Freeman, comes third with 79% of the votes.

Alex Ion said: “Freeman has a natural baritone voice which is the voice type that the human ear finds easiest to process. If listening to this tone before bed, your brain will not be working overtime to process what he is saying allowing you to fall asleep. Such tone is arguably associated with competence, wisdom and strength which, much like Attenborough, creates a sense of trust and comfort that makes you relax.”

Seth Rogen (78% of votes), Julie Andrews (73% of votes) and Harry Styles (71% of votes) are among the celebrities that received over 70% of votes, respectively ranking fourth, fifth and sixth.

Rounding off the top 10 most soothing celebrity voices are Emily Blunt (65% of votes), Tom Hardy (64% of votes) and Meryl Streep (61% of votes) respectively ranking eight, ninth and tenth.

At the other end in eighteenth place is the former US President Barack Obama with 46% of voters maintaining he has the most soothing celebrity voice. Obama is followed by actor and environmentalist Leonardo DiCaprio (41% of votes) and the Queen of Dragons, Emilia Clarke (39% of votes) respectively ranking nineteenth and twentieth.

TheDozyOwl asked 3,488 people worldwide which celebrities they thought had the most soothing voices to fall asleep to.

Aisha Linnea Shared Pictures From Her Second Marriage With Fans