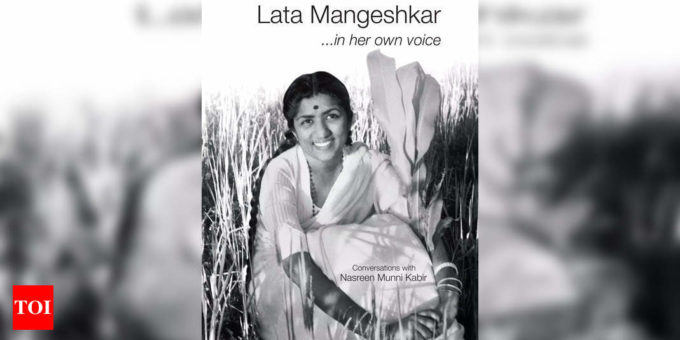 Legendary singer Lata Mangeshkar, 92, passed away on February 6, 2022 and her death marks the end of an era in the world of music. The nightingale of India, Lata Ji mesmerized generations of listeners across the world through her magical and timeless voice. Lata Ji recorded her first song in 1942 at the age of 13 and the rest, as they say, is history. With a career spanning roughly seven decades, she has sung over 30,000 songs in various languages. She reigned the Indian film industry for decades and was conferred India’s highest civilian award, the Bharat Ratna in 2001. But despite having an extraordinary gift of singing and being in the limelight, she was a deeply private person.

As we pay tribute to the legendary singer, here we share an excerpt from the book ‘Lata Mangeshkar…in her own voice’ by Nasreen Munni Kabir. The book is a collection of fascinating conversations between Lata Mangeshkar and the author, which give a glimpse into the world of the gifted singer and reveal the person that she was.

The excerpt from the book is published with permission from Niyogi Books.


LM: Throughout my childhood, I listened to Baba sing and could remember every note, but didn’t have the courage to sing in front of him. One day, he was teaching Raag Puriya Dhanashri to a young shagird and for some reason, he left the room and Baba’s pupil continued singing. I was playing outside and heard him. I had a feeling the boy wasn’t singing it right. So I went in and said: ‘That isn’t it. This is how it should be sung.’ And I sang the notes to him. At that moment, my father returned and heard me. He called Mai, my mother, and said: ‘We have a good singer at home and never knew it.’
At six the next morning, Baba woke me saying: ‘Take the tanpura. You will study singing.’ We began with the same raag — Puriya Dhanashri. That was the day I started learning how to sing. I think I was about five years old.

NMK:
It is said when you were six, you were singing a song and suddenly became unconscious. And when you woke, you continued singing from the point you left off. Is this true?

NMK:
Clearly you are mythologised like people who capture the imagination of millions — and so stories about you spread like myths whether true or false. Maybe we must attribute this story, like many others found in great abundance on the Net, as part of ‘Lata-lore.’ May we start at the beginning? Where were you living in the 1930s?

LM: We were in Sangli, a small trading town in Maharashtra. My father owned a large house with thirteen rooms. We lived on the top floor, and the ground floor of the house had been converted into small flats which were rented to different families.

NMK:
These were the days of prosperity when your father, Deenanath Mangeshkar, a celebrated singer, stage-actor, and co-producer of musical plays [sangeet natak] was considered a leading light of Marathi theatre. Did he run his own theatre company?

LM: Yes. It was called the Balwant Sangeet Mandali and was formed in 1918 when Baba was eighteen. The company was created with his friends Chintamanrao Kolhatkar and Krishnarao Kolhapure, Padmini Kolhapure’s grandfather, and whom my paternal aunt later married. Baba was from Mangeshi, a small place in Goa and when he was about eight or nine, his mother sent him to study music under Baba Mashelkar who was in Goa at the time. My father later became a disciple of the Gwalior gharana.

NMK: What was the most enjoyable aspect of your singing lessons?

LM: What I liked best was learning how to sing a bandish — and I learned as many as I could. I didn’t pay as much attention to sargam or alaaps. I would ask Baba to explain the personality of a raag to me. How is this raag? How is that raag? By God’s grace and His blessings, my voice could handle taans and I sang them well.

NMK: How old were you when you first performed in public? How did it come about?
LM: It was in the late 1930s. Baba’s theatre company was on tour in Sholapur and one day some people asked him to sing at a concert. I overheard their conversation and asked: ‘Baba, can I sing with you?’ Laughingly, he replied: ‘How will you sing?’ ‘Why not? I can sing!’ So he said: ‘Which raag will you sing?’ ‘Khambavati. And two songs as well.’ He finally agreed to let me sing on stage.

In our theatre company, we had a harmonium player whom we affectionately called Babi ‘Borkar’— from the English ‘bore karne wala’ [a bore], and a tabla player, Ustaad Valya. They accompanied me as I practised for a few days.

The music programme was held at Nutan Theatre in Sholapur and before Baba came on stage, I sang Raag Khambavati followed by two Marathi songs: ‘Shura mi vandile’ from K.P. Khadilkar’s play Manapaman and ‘Suhasya tujhe manasi mohi’ from Prabhakar’s play Brahmakumari. Then my father sang through the night. I remember falling asleep on the stage with my head in Baba’s lap. It was my first public performance. I was nine years old. [smiles]

I sang at other concerts with Baba, and when I was eleven, we sang together on the radio.

NMK: Did your father tell you something about singing or music that has helped you through your life?
LM: When I was learning how to sing, I used to make all kinds of excuses. I was very young and preferred playing. I pretended to have a headache or stomach ache. It was always something. I would run from the room where Baba taught me. Sometimes he would catch hold of me and bring me right back. I would protest saying: ‘I feel shy to sing in front of you. I’m scared.’

One day Baba sat me down and said: ‘I know I’m your father. But a father is like a guru too. Always remember — whether a guru or father is teaching you — when you sing you must think to yourself you will sing better than him. Never think how can I sing in his presence? Remember this. You must excel your guru.’ I have never forgotten Baba’s words.

NMK: What did your father think of film music?
LM: Film music wasn’t hugely appreciated at home. The family preferred classical music. And my father was a very conservative man. He was strict about the way we dressed, we could never wear powder or make-up. We couldn’t go out freely. Baba didn’t like us going out late at night to watch plays, not even his own productions. He was strict in that way. But that was the norm; this was some seventy years ago. During our childhood, we lived according to the mores of the time.

Mai was from Khandesh and wore the traditional nine-yard saree. She remained a pure vegetarian throughout her life, but cooked nonvegetarian food for my father. My brother Hridaynath and his daughter, Radha, are also vegetarian and don’t even eat eggs. But we sisters became non-vegetarian.

Baba didn’t like films. We weren’t allowed to go to the movies — except for films made by Marathi filmmaker Bhalji Pendharkar and Calcutta’s New Theatres. Baba believed their productions had good music and sensible stories. He always liked Saigal Sahib and so did I. At home I sang his songs, especially ‘Ek bangala bane nyara’ from the film President. I was allowed to sing Saigal Sahib’s songs at home but no other film songs. Nor did I much care for them.

From Sushi To Mughlai, Suresh Raina Savours It All This Weekend

Amber Guyger, Ex-Dallas Police Officer, Is Guilty of Murder for Killing Her Neighbor
2019-10-02