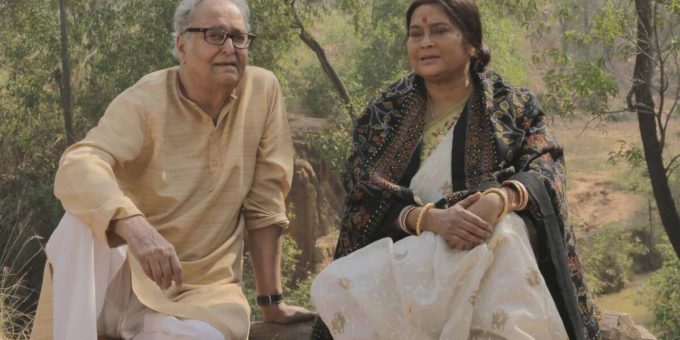 In a pivotal scene in Belaseshe (2015) – translated as ‘at day’s end/autumn of life’, a story about an ageing couple, where the man seeks separation from his wife of almost 50 years – Soumitra Chatterjee’s Biswanath tells wife Swatilekha Sengupta‘s Aarti, how he feels there’s no love left in their marriage, it’s only a mere habit. Aarti stops knitting to calmly launch into a discourse on obhyash (habit) and bhalobasha (love). She says how she uses the same wet towel that he leaves behind post-shower, eats his leftover fish skin, cleans up after he leaves the washroom – because in all these she finds him, and, for her, love manifests in these habits. “It was a single-take shot, and after it was over, the entire unit was in tears,” says Shiboprosad Mukherjee, one half of the film’s director duo Shiboprosad-Nandita.

“In my years of directing, I’ve seen that whenever the unit personally connects with a performance, you know there’s something (powerful) in your cinema,” he says, adding that the sequel Belashuru (the day’s beginning) – which takes off from where the first left – is ready for release but “Soumitra-Swatilekha’s last film together” deserves a big-screen release, post-pandemic, that’s a promise he made to the two veteran actors and shall wait even if it takes three years.

Actor Rituparna Sengupta, who plays one of the daughters, speaks of an uncanny reel-real connection as Soumitra and Swatilekha passed away “back to back” (him in November last year and her now), that what Arati told Biswanath in the film – “I want you to leave the world before I do, because if I left earlier, you won’t be able to bear the pain” – became a reality.

Working with her late onscreen parents was a “career milestone” for Sengupta, she says from Singapore. “I was always in awe of her. She was an epitome of everything, not just theatre. Our colossal loss, emotionally and professionally, can never be overcome. Naatok er jini samrajni chhilen, cinema joto tuku peyechhen onar kaachhe, cinema has prospered (Cinema prospered from whatever little it got from the empress of theatre),” says Sengupta.

Swatilekha’s cinematic high-point remains her first film Ghare Baire (1984), as Satyajit Ray’s heroine Bimala, and then a small role in Roland Joffé’s City of Joy (1992). She’d said, in many interviews, that after Ray’s film released, Indian critics unleashed vitriol on the “unlikely” heroine who “didn’t look or live the part”, she sank into depression, though Ray guarded his “most intelligent actress” and told her to focus only on international reviews, which, after the Cannes premiere, appreciated the “pretty, surprisingly willful Bimala”. “The actor who returned to the camera after three decades was more confident and raring to go,” says Mukherjee, 47.

When he and co-director Nandita Roy cast Swatilekha’s daughter Sohini in their debut film Icche (2011), Mukherjee says, he sensed a hurt in his former teacher for not considering her, too, for a role. He trained with Swatilekha at Nandikar theatre group, helmed by her, Sohini, and husband Rudraprasad Sengupta. As a “whole-timer”, he learnt “physical acting, vocal acting… that was a very crucial period in my life. Swati-di would read out and voice-act plays (Shakespearean plays Hamlet, Macbeth, Julius Caesar and King Lear, among others), tell us why they were written, analyse each character. My inclination towards world theatre developed there. She’d also shield me from Rudrababu’s wrath,” says Mukherjee, who’d first heard Swatilekha in and as Antigone in the Sophoclean tragedy (in which Rudrapasad essayed King Creon), which was initially a radio play and later released in cassette and LP records. “That play really haunts me, I often listen to it and Swati-di’s extraordinary vocal-acting still rings in my ears,” he says, adding that in Class XII, after watching (the 1988 play) Shesh Sakshatkaar, he wanted to become an actor with Nandikar.

The tables turned in 2014, when student (Mukherjee) cast teacher (Swatilekha) for Belaseshe. She was slightly “apprehensive about facing the camera after 30 years (opposite her former co-star Soumitra, signed the same day as her), being out-of-practice”, and the audience expected “Soumitra-Sabitri (Chatterjee), Soumitra-Lily (Chakraborty), or Soumitra-Madhabi (Mukherjee) pairing, but Swati-di was our first choice. She left everybody far behind in acting, in the film; after every scene, during the shoot, Soumitra-babu would say, Swati phaatiye dicche, ki oshamanyo abhinoy korche (Swati is performing exceptionally),” says Mukherjee, adding that accolades poured in from Amitabh Bachchan, Mahesh Bhatt, Subhash Ghai and the Malayalam and Marathi film industry.

“A disciplined actor, she would stick to the script and listen intently,” he says. “’Shibu, amay shobai bolche, tumi keno bolchona, shot ta bhalo hoyeni? (everybody’s praising, why aren’t you, didn’t I do a good job?),’ she’d say,” he recalls. Within the first week of shooting, the crew became like a family. “(Onscreen son) Shankar Chakraborty still carries Soumitra-Swatilekha’s photo in his wallet,” says Mukherjee. Sengupta recalls a train journey, from the film’s shoot, when both Soumitra and Swatilekha sang, recited poetry, relayed stories, and in Santiniketan, after the day’s shoot, the crew would sit to play antakshari. “In Belashuru all of us danced as well and she’d speak excitedly about how she danced in their (Nandikar’s) recent production Naachni,” she says. Swatilekha “was so unassuming, always preferring to stay low-key” and “had a very unusual voice”, her dialogue-delivery was “effortless”, and her face “expressionless”, as her role demanded… “there was so much to learn from her,” says the actor.

Opinion | Will Christian America Withstand the Pull of QAnon?