Breaking News
2022-07-01 Baltimore Banner, a News Start-Up, Aims to Challenge The Sun 2022-07-01 Maharashtra: Is it the end of the road for Shiv Sena and Uddhav Thackeray? 2022-07-01 Poland buys 32 helicopters from Italy’s Leonardo 2022-07-01 Kanwal And Zulqarnain Enjoying Vacations In Europe 2022-07-01 Property developer reveals plans to convert former HSBC bank into apartments 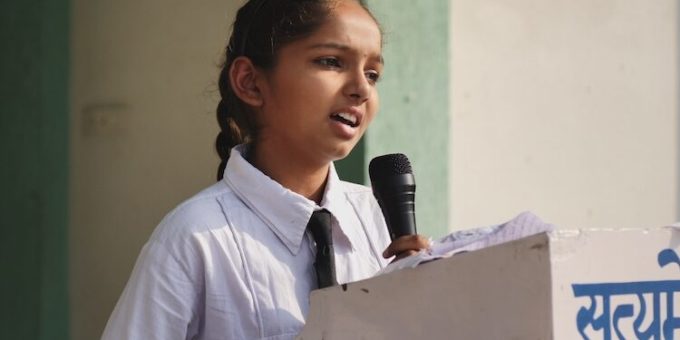 Here is the first look at what will be showcased at the 2022 The London Indian Film Festival (LIFF).

LIFF will be screened in various cinemas across London as well as regionally in Manchester, Birmingham and Leeds from 23 June to 3 July.

Here is what is in store for Manchester:

Girls For Future (above) is an inspiring doc about four young front line activists, aged between 11 and 14 years old from Indonesia, Senegal, India and Australia. They represent the voice of a new generation directly affected by the climate crisis and environmental degradation at their doorstep. These four young women show tremendous endeavour, courage and power as they take on the government officials and established norms and try to bring about real world solutions to restore and protect their family and homelands, and our global climate.

Dr. Shweta Gosh delves into the stories of film and video makers with disabilities in India and the inaccessibility and barriers to film consumption and education, and how the they find ways to articulate their creative vision. This inspiring and uplifting film discusses why it’s so important the film sector is more open to differently abled people.

India’s internationally best known director, Anurag Kashyap, returns to the festival, this surreal Sliding Doors style story, telling of a young nurse (Taapsee Pannu), who moves in with her husband and daughter, next to a derelict house. Searching through the new place they come across an old camcorder. Playing it during an electric storm the nurse, freakishly connects live to a little boy who lived in the house decades before, but died. In an attempt to stop the boy’s death she begs him not to go next door to the deserted house. He delays and this not only disrupts time, but her own life story with terrible consequences.

An essential guide to the paradigm-shifting British Asian electronic music scene. From the rubble of race and class conflict in the 1980s emerges a new breed of British Asian artist – politically sensitive, culturally complex and musically radical. The film documents a whole range of personalities, ranging from Bhangra pioneer Kuljit Bhamra, TJ Rehmi, Cornershop, Asian Dub Foundation, FunDaMental and Apache Indian, to another generation of artists such as Shiva Sound System and Swami.

TOO DESI TOO QUEER

Too Desi Too Queer’ shorts programme, exploring images of the lives, experiences and well being of South Asian LGBTQIA+ communities in the Subcontinent and diaspora, through a dynamic and thought-provoking selection of recent LGBTQIA+ short films.

The full programme can be viewed here

The festival had earlier announced Blue Orchid Hotels as its title sponsor.

Cary Rajinder Sawhney, LIFF festival director said: “We thank Blue Orchid Hotels for its generous support. Its owner Tony Matharu has not only been our most dynamic patron but in fact our first sponsor, back in 2010, so it’s very special to see this relationship growing as the festival expands year on year. We look forward to working together on this year’s four city festival.”

“I am a firm supporter of the culture and arts sector, and understand the value it brings to our unique capital city.

Tony Matharu, is a Patron of the London Indian Film Festival, Chairman of Blue Orchid Hotels and Integrity International Trust and Founding Board Member of the Central London

He said: “I have witnessed first-hand the growth of the festival into one of the world’s largest and most high profile festivals for South Asian films, showcasing rich and exceptional talent, drawing attention and critical acclaim to filmmakers and the diverse range and depth of their films.

“You will always see insightful and thought-provoking films at LIFF which is a wonderful addition to the vibrancy of London’s cultural and arts offering.

“The hard work of the LIFF team is more important than ever as it contributes to the essential agenda of welcoming people back to London, of which Blue Orchid Hotels is an advocate.

“We must continue to ensure the rich tapestry of life is embedded within London, it remains as a global player and the best city to visit, work, invest and live in.”

They Had Until April, Turkey Shuts Airspace To Syria-Bound Russian Jets
2022-04-23