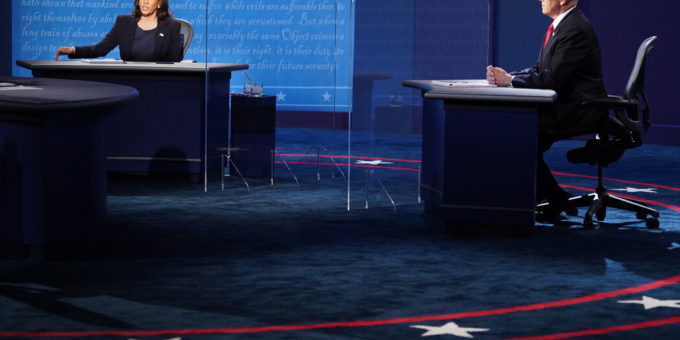 The debate between Senator Kamala Harris of California and Vice President Mike Pence was certainly memorable.

I’ll mention the fly, just to get it out of the way.

“It was, I think, the most interesting vice-presidential debate in years,” Raphael Sonenshein, the executive director of the Pat Brown Institute for Public Affairs at Cal State Los Angeles, told me.

Mr. Pence, he noted, was carefully tailoring his performance for an audience of at least one: President Trump.

Ms. Harris, on the other hand, “didn’t go in there and try to be somebody she’s not,” he said.

“She didn’t appear to be governed by that model, and I think it’s about time,” he said.

But were there any policy revelations likely to move voters? Not so much, especially because Mr. Pence made misleading or false claims about a range of subjects and both candidates failed to directly answer many of the questions.

Still, it wasn’t for lack of worthwhile topics to discuss, Mr. Sonenshein said.

The candidates were asked about climate change; the vice president mentioned Gov. Gavin Newsom’s acknowledgment that California’s forests must be better managed, as the president has suggested. Ms. Harris said the fires and other natural disasters were proof that any future administration must be guided by science.

They were asked about race and police violence.

One thing Mr. Sonenshein said he was surprised he didn’t hear more about was California.

“I thought California was going to be ‘the hellscape America is facing if Biden and Harris are elected,’” he said.

During the debate, sometime around when Ms. Harris and Mr. Pence briefly discussed the record-breaking fires that have pummeled the state, Gov. Gavin Newsom fired off a four-word tweet that’s become something of a refrain:

Earlier in the day, standing in an organic walnut grove in Winters, the governor unveiled the latest in a series of sweeping actions he has promised to take to tackle it.

Mr. Newsom picked up a walnut in one hand and with the other signed an executive order calling for the conservation of 30 percent of the state’s land and coastal water by 2030.

“This is a critical part of the climate change conversation,” he said.

The order calls for the establishment of a collaborative aimed at restoring the state’s biodiversity and to come up with plans to protect forests, wetlands, farmland and coastal areas.

But that, he said, doesn’t mean simply keeping those lands untouched. He said that the changes will create opportunities; he’s sought to position the state as a leader both nationally and globally in building a green economy.

Late last month, Mr. Newsom announced a splashy plan to ban the sale of new gas-powered cars in 15 years — a move many environmental groups applauded, but warned the ban must come with strong action to stop fossil fuel production in California.

[Read the full story on the state’s plan to ban the sale of gas-powered new cars.]

This week, responses from environmental groups were similar to the announcement about the land and water conservation, which laid out ambitious goals, but left the specifics about how they’ll be achieved to the future.

I asked my colleague Somini Sengupta, who covers climate change, how the “30 by 30” goal fits in with broader international efforts. Here’s what she said:

The governor’s pledge is in keeping with targets proposed by the United Nations to protect the planet’s fast-disappearing plants and wildlife. In January, the United Nations Convention on Biological Diversity published a draft proposal to protect 30 percent of the Earth’s land and ocean in the next 10 years. Negotiations among the nations of the world were due to take place this month in Kunming, China, but were postponed because of the coronavirus pandemic.

An exhausting report, published by the United Nations in September, warned of a catastrophic collapse of global biodiversity that endangers humanity’s food supply, health and security, along with the vanishing of entire species of animals and plants.

[Read the full story on the collapse of earth’s biodiversity.]

California embodies the impact of the relentless extraction of nature. Its wildfires are exacerbated by climate change and poor land management.

Read more about how climate change is affecting the Golden State:

And if you missed it …

Eddie Van Halen, rock guitar virtuoso, beloved son of Pasadena (although he was born in the Netherlands) and possessor of a truly outstanding mane, died on Tuesday at age 65.

The tributes have been flowing since.

Jill Cowan grew up in Orange County, graduated from U.C. Berkeley and has reported all over the state, including the Bay Area, Bakersfield and Los Angeles — but she always wants to see more. Follow along here or on Twitter.