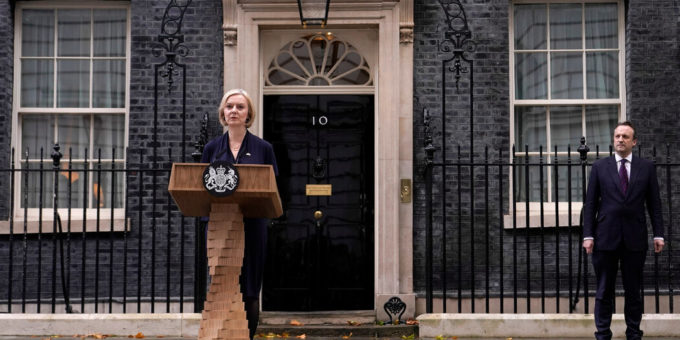 LONDON — The rapid political collapse of Liz Truss ended as she announced her resignation on Thursday, a little more than six weeks after she became Britain’s leader. Her agenda had floundered, her own party had turned on her and commentators widely speculated on whether she could outlast a head of lettuce. She couldn’t.

She had pledged to shoulder through the turmoil despite widespread calls for her resignation. But minute by minute the heat on her grew until there was no path out.

If you need to get caught up, here is a guide to the basics.

Who is Liz Truss and how did she become prime minister?

Ms. Truss was anointed on Sept. 6 to replace Boris Johnson, who was elected by voters in 2019 but who flamed out in spectacular fashion after a series of scandals, forcing him to step down in July.

The general public did not elect Ms. Truss — instead, she won a leadership contest among members of her Conservative Party. To replace Mr. Johnson, the party’s members of Parliament narrowed a field of candidates to two, who were then put up to a vote by about 160,000 dues-paying party members. (They’re an unrepresentative group of the nation’s 67 million residents, far more likely to be male, older, middle-class and white.)

Ms. Truss, 47, had been Mr. Johnson’s hawkish foreign secretary, a free-market champion and eventual supporter of Brexit (after she changed her mind), winning over the right flank of the party despite her more moderate past. (Before joining the Conservative Party, she was a member of the centrist Liberal Democrats when she was a student at Oxford University.)

How did it start to come undone?

She was never going to have it easy. As Ms. Truss entered office, the nation was staring down a calamitous economic picture, highlighted by energy bills that were predicted to jump 80 percent in October and jump again in January. It threatened to send millions of Britons, already reeling from inflation and other challenges, spiraling into destitution, unable to heat or power their homes.

So it was unwelcome news when her signature economic plans immediately made things worse.

Her announced plans for tax cuts, deregulation and borrowing so alarmed global investors that the value of the British pound sank to a record low against the U.S. dollar. The Bank of England stepped in to prop up government bonds, an extraordinary intervention to calm the markets.

The response left no doubt that her free-market ambitions were untenable. In a humiliating reversal, she was forced to reverse virtually all of the tax cuts this week, including a much-criticized one on high earners. She fired Kwasi Kwarteng, the chancellor of the Exchequer who was the architect of the plan and a close ally, and adopted economic policies favored by the opposition Labour party.

“You cannot engage in the sort of U-turn that she has engaged in and retain your political credibility,” said Jon Tonge, a professor of politics at the University of Liverpool.

How did her tenure come under threat?

Her concessions did little to mollify a growing rebellion from within her own party, which had the power to topple her in much the same way it toppled Mr. Johnson.

The Conservatives — also known as Tories — had seen their popularity decline in public opinion polls after Mr. Johnson’s scandals, and their numbers cratered to staggering new lows as Ms. Truss stumbled. A Redfield & Wilton Strategies poll this week revealed the lowest approval rating it had ever recorded for a prime minister, with 70 percent disapproving of Ms. Truss, including 67 percent of Conservatives.

The Conservative Party’s discontent with Ms. Truss crescendoed in turn, and she was enveloped with a palpable sense of crisis. On Wednesday, it boiled into a frantic fight for her survival — “I’m a fighter and not a quitter,” she said while being grilled by members of Parliament.

Then even more chaos broke out. Suella Braverman, Britain’s interior minister, stepped down after an email breach, but took a swipe at Ms. Truss in her resignation letter, saying she had “concerns about the direction of this government.” A vote on fracking in Parliament turned into a reported scene of bullying, shouting, physical manhandling and tears. More Conservative members of Parliament openly called for Ms. Truss to step down. Rumors swirled of high-profile resignations. It was difficult to keep up.

“In short, it is total, absolute, abject chaos,” a news announcer said on iTV. Charles Walker, a Conservative lawmaker, did not hold back in an interview on BBC.

On Thursday, she said she had handed her resignation to the king, with a new leadership election planned within a week.

Ms. Truss will remain prime minister until her successor is chosen. (Here are the likely front-runners.) In her resignation remarks, Ms. Truss said a leadership election would be completed in the next week, bringing Britain its second unelected leader in a row.

The next general election — when the entire public can participate, and the next opportunity for Labour to take control — is not scheduled until January 2025 at the latest. A Conservative leader could call for one earlier, but they would have little reason to do so imminently since polls indicate the party would be wiped out by Labour.

Mr. Tonge said one advantage Conservatives have is time — the party could theoretically regain credibility if the economy recovers in the following years, he said.

“I don’t think that changing the leader will necessarily save the Conservatives,” he said. “But you can engage in damage limitation by doing so.”

China anger over death of girl, 14, sent to Covid quarantine