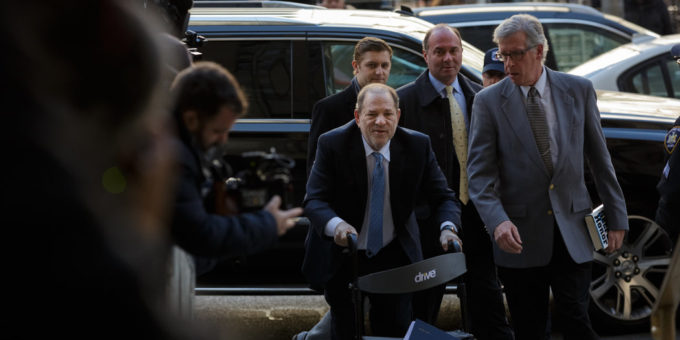 Harvey Weinstein, the once powerful film producer, was in good condition on Thursday after being hospitalized with chest pains the night before, only hours after a New York judge sentenced him to 23 years in state prison for sexual attacks on two women, his lawyer said.

Mr. Weinstein’s spokesman, Juda Englemayer, had said on Thursday morning that the movie producer had suffered a “mild heart attack” after his court appearance, but Mr. Englemayer later retracted that statement, saying Mr. Weinstein had been diagnosed with dangerously high blood pressure.

Before his sentencing, Mr. Weinstein had been housed at an infirmary on the Rikers Island jail complex because of his health problems. Last week, doctors at Bellevue Hospital Center in Manhattan performed a heart procedure, inserting a stent to alleviate a blockage.

At his sentencing on Wednesday, Mr. Weinstein, 67, appeared in a Manhattan court in a wheelchair and gave a rambling speech, expressing remorse, but never apologizing to his victims. He compared himself to Hollywood figures blacklisted in the 1950s during a national scare over communism.

Justice James M. Burke rejected his pleas for leniency, issuing the relatively long sentence. The judge said evidence had been presented at trial of other sexual assaults in the past. While it was Mr. Weinstein’s first conviction, he said, it “was not a first offense.”

As his victims broke into tears in the gallery, Mr. Weinstein was then handcuffed to his wheelchair and transported back to jail. Within hours, however, he complained of chest pains, and corrections officers sent him to a jail ward at Bellevue, Mr. Englemayer said.

In court, Mr. Weinstein’s lawyers had made an impassioned plea for the producer to receive a minimum sentence of five years in prison, arguing that even that would likely be a “de facto life sentence.”

Ms. Rotunno said in court that Mr. Weinstein has a history of heart disease in his family. Without going into detail, she said that one of Mr. Weinstein’s diagnosed health problems required close monitoring and could be deadly.

She added that a five-year sentence might mean Mr. Weinstein would never return to freedom. “It is very possible that Mr. Weinstein, given his health, doesn’t live to see the end of that sentence,” Ms. Rotunno said. “That’s a very sad set of circumstances, but it is a potential fact.”

In December, Mr. Weinstein underwent back surgery to repair an injury he received in a car accident four months earlier. Since then, he has used a walker to get around.

His health declined rapidly after a jury of seven men and five women convicted him on Feb. 24 on charges of third-degree rape and first-degree criminal sexual act.

Six women testified against Mr. Weinstein at his trial, but the five-count indictment mostly relied on the accusations made by two of them: Miriam Haley, 42, and Jessica Mann, 34.

The jury determined that Mr. Weinstein raped Ms. Mann in a Midtown Manhattan hotel room in 2013, and that he forcibly performed oral sex on Ms. Haley inside his Lower Manhattan loft in 2006.

The jury declined to convict him of the three most serious charges, including the first-degree rape of Ms. Mann, concluding that Mr. Weinstein did not use force or threaten her. Jurors also did not convict him on two counts of predatory sexual assault.

After the verdict, Mr. Weinstein was taken by ambulance from the State Supreme Court in Manhattan to Bellevue Hospital Center with high blood pressure and heart palpitations.

He remained at the hospital for 10 days, underwent the heart procedure to install a stent and was then transferred to the North Infirmary Command, part of Rikers Island that houses inmates whose safety may be at risk if they are placed in the general population.