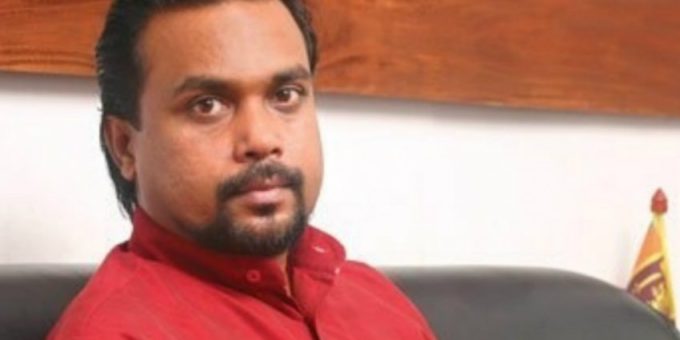 He questioned, “Why do we need an office of the American Bar Association here?” MP Weerawansa said when the Americans start doing as they wish here in Sri Lanka, and if a Sri Lankan girl is raped, and the American citizen is taken to court, an American lawyer will then go to the courts too.

He noted as they are not bound by Sri Lankan law, the authorities might have to release the suspect to the US government.  He said the court will be powerless, the agreement will be all powerful.

According to Weerawansa, a political chameleon says that some are fearmongering speculating the arrival of the American forces and the same chameleon who once called Ranil Wickramasinghe a Don Juan Dharmapala, a Periya Bandara, and now calls him a Dutugemunu.

He noted this tall man who brought America and mollycoddled them and treated them as they wished and he is one who went there for training for a month.

When journalists questioned him if there is a connection to the 2020 candidate within this entire process, he noted that two days before the attacks, the US ambassador was in Batticaloa and joined two openings with Governor Hizbullah.

The parliamentarian said, according to external sources, these buildings are made to house civilians in case of an emergency situation and if there is to be a tragedy, it will not only affect Batticaloa. He pointed out that there is something bigger happening internally here. Extremist Islam and US tactics are not two things, they are the same. He added that the disaster is the loss of lives and death is what is used to bring in their forces.

Weight Loss: Is it physical hunger or emotional hunger?