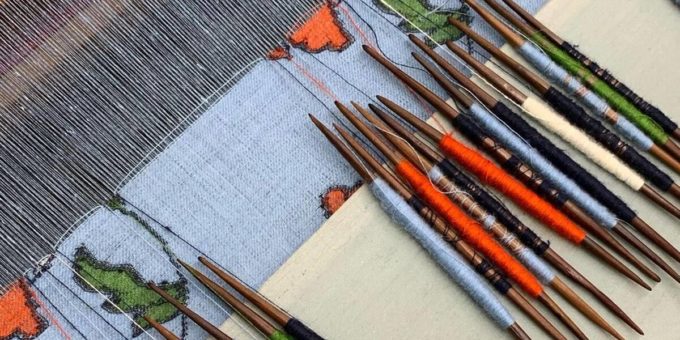 If India were to be a piece of fabric, it would be an omnium-gatherum of its many age-old weaving traditions that not only span the length and breadth of the country, but also vary within its states. As such, when it comes to shawls, it is no different.

While the globally coveted Pashmina and the now-banned Shahtoosh shawls from Kashmir and Ladakh have continued to retain throne, there are other weaves of shawls that dot the map of the country. Shawls from India feature locally-influenced motifs that tell the story of the weaving community/the state of origin, and fabric to suit the respective temperature conditions as the cashmere wool in the northern parts of the country with harsher winters is substituted for lighter fabrics like cotton, silk, jacquard, etc. down south.

Here’s taking a look at the myriad shawls from India:

Rooted in the folk traditions of Nagaland, the shawls are easily distinguishable due to their unique colour palette of black and maroon with designs in red, white and yellow. The designs consist of abstract as well as figural representations of humans and animals and even have variations from the various tribal communities from the state. These are typically made in wool and are perfectly suited for the winter weather temperatures across North Indian states.

The tradition of weaving Bhujodi shawls in Gujarat is over 500 years old, a testament to the history of the travelling Vankars from western Rajasthan, originally known as Marwada weavers (from the Meghwal community in Rajasthan). Their unique weaving tradition is attributed to their connection with Rabari tribe in Kutch, which is where the Vankars migrated to 500 years ago. These shawls are woven with extra-weft designs on a plain warp, using rich shades of natural colours. The designs used are mostly geometric and have a unique, aesthetic arrangement. Their ingenuity also lies in the fact that they not only provide warmth during winter, but also keep the wearer cool during summer (when woven loosely).

The women of the Dongria Kondh tribe of Odisha weave a shawl that represents their unique culture through four major colours — red, yellow, green, and brown, each of which symbolises the tribe’s values. They were initially woven only for themselves or for gifting to elders as a mark of respect. These shawls are entirely handmade on a coarse white fabric that the Dongria Kondh buy from the Domb community in exchange for crops.

The ancient embroidery technique of West Bengal, the kantha is a brilliant example of time-consuming, meticulous, intricate embroidery traditions of India. The running embroidery style is done on silk shawls to suit the moderate winter temperatures of the state. Kantha is a centuries-old form of stitching rags together to form patchwork clothes.

In Andhra Pradesh, you can get kalamkari shawls in hand-printed or block-printed designs in either Srikalahasti or the Machilipatnam styles. Made in cotton using natural, rich colours, these designs hold religious significance. In authentic kalamkari fabric, imperfections add to its beauty owing to its handmade nature, and it also smells faintly of buffalo milk, which is traditionally used in the making of the kalamkari fabric to prevent the dyes from smudging.

The pashmina shawls from Kashmir have graced royalty from around the world through centuries. Made from the fleece of the local Cashmere goat, it is one of the most luxurious fabrics known to mankind, which grows in the Changthang region of Ladakh. The pashmina fabric is embroidered on using meticulous and intricate hand embroidery techniques called aari, kani, and sozni which make for priceless heirlooms.

Also called ‘Loi’, Kullu shawls are one of the most popular exports of this Himalayan state, second perhaps only to its apples. Made with the wool of Angora rabbits or local ‘Deshkar’ and ‘Bygani’ sheep with a dovetail or slit tapestry technique, these shawls were traditionally made in natural wool shades and are distinguished by their striking motifs of both geometric and floral styles which depict religion and traditions.

Himroo shawls from the Aurangabad and Hyderabad region is facing threats of decline. These shawls are made from silk and cotton threads. The fabric of Himroo shawls, which imitates the feel of silk, is a reinterpretation of the Persian weave Kinkhwab which was meant for royalty. They feature Persian designs and come in jewel tones which imparts a glazed appearance to these shawls, which were a favourite amongst royals.