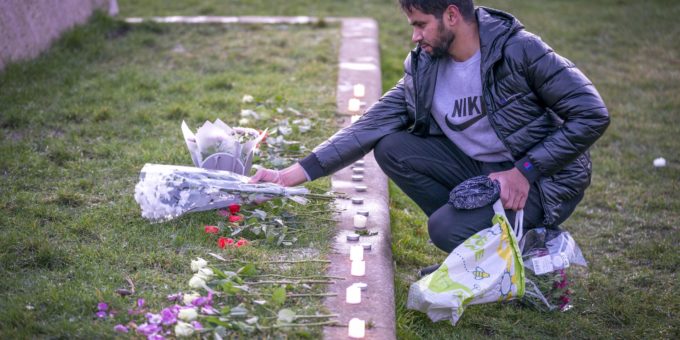 THE family of a mother-to-be who fell to her death from Arthur’s Seat in Edinburgh said the “spark has gone out of our lives forever” as a vigil was held in her honour.

Fawziyah Javed, 31, from Pudsey, died in Holyrood Park in September. Her husband has appeared in court charged with her murder.

On Friday, the date the lawyer’s unborn son had been due, people gathered to remember a woman who “would always take time out to help others”.

“Fawziyah has left a massive void in our lives. The spark has gone out of our lives forever. We miss you every single second of the day,” her family said in a statement read out at the short service outside the Scottish Parliament, in view of the hill where she died.

The family, who were attending a similar vigil in Millennium Square next to Leeds Civic Hall, said in their tribute that when she died their lives “were devastated and our world shattered forever”.

Before laying flowers at the service, Adnan Hanif, her 29-year-old uncle who is studying in Edinburgh, said: “It was a big, big tragedy.

“She was very caring and helpful. She considered that she had an honour to help other individuals.

“She was an only child and it is a big tragedy for us. All her family members are missing her a lot.”

People from across Edinburgh and beyond attended the service in Scotland, where flowers were laid and candles were lit in her memory and speeches made by women’s organisations from across the capital.

A statement read out on behalf of Farah Siddiq – from the Amina organisation, which supports Muslim women in Scotland – said: “Fawziyah was well known for her kindness, generosity, big heart and selflessness.

“Fawziyah would always take time out to help others, whether it was volunteering with a charity or helping a friend in need.

“Fawziyah would often go over and beyond the call of duty. Truly inspirational and a great role model to others. God gifted, so special in many ways.”

A minute’s silence was then held in her memory.

Ms Javed’s husband, Kashif Anwar, 27, made no plea when he appeared at Edinburgh Sheriff Court in September.