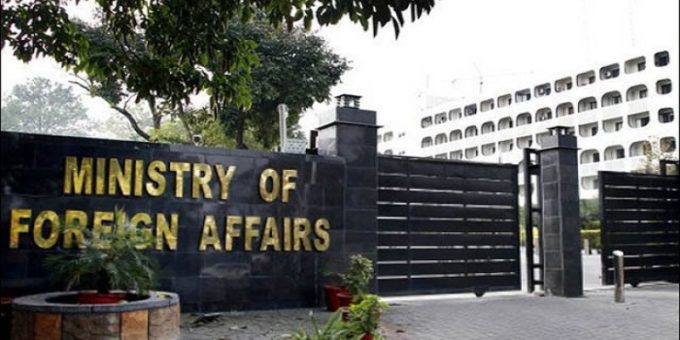 In response to highly irresponsible and provocative statements by the Indian defence minister made a day earlier, Pakistan on Sunday said that it is “fully prepared” to respond to Indian aggression, but will continue to act responsibly and work to promote peace.

“While fully prepared to respond to India’s provocations and irresponsible behaviour, Pakistan will continue to act responsibly and contribute to all efforts for promoting peace,” read a statement issued by the Foreign Office.

Indian Defence Minister Rajnath Singh, according to Indian news agencies, had said: “Pakistan makes all efforts to destabilise peace in India but we have sent a clear message to them that we will hit back.”

“This is a new and powerful India,” Singh added, while addressing the Shaheed Samman Yatra in Uttarakhand’s Pithoragarh.

The Foreign Office, in its statement today, said that his unfounded remarks “are delusional on the one hand, and reflective of India’s characteristic hostility towards its neighbours on the other”.

“India’s smear campaign against Pakistan has been totally exposed and discredited. It has no takers in the international community,” said the statement.

The Foreign Office said that it is no secret that Indian leaders “engage in falsehoods and fantasies while pointing fingers at neighbours including Pakistan”.

It added that in doing so India wants to divert the attention of the international community from the widespread violations of human rights and international humanitarian law committed by Indian occupation forces in Indian-occupied Jammu and Kashmir.

“Pakistan is fully capable of defending itself against any aggression. The entire world was witness to Pakistan’s capability and resolve in thwarting the Indian misadventure in February 2019,” read the statement, issuing a reminder to all regarding the downing of two Indian Air Force jets and the capture of an Indian Air Force officer by the Pakistan Air Force.

The statement highlighted that the ongoing human rights violations in India-occupied Kashmir are a well-documented fact.

It went on to state that the Dossier presented by Pakistan to the international community in September 2021 “contains incontrovertible evidence of the gross and systematic human rights violations and crimes against humanity by Indian occupation forces in India-occupied Jammu and Kashmir”.

The Foreign Office said that the Indian government’s frustration is evident from the fact that despite its unabated state-terrorism in India-occupied Jammu and Kashmir, it has “utterly failed to silence the peaceful voices of Kashmiris” demanding their right to self-determination promised to them by the United Nations Security Council in its various resolutions.

“While fully prepared to respond to India’s provocations and irresponsible behaviour, Pakistan will continue to act responsibly and contribute to all efforts for promoting peace, security and stability in the region and beyond,” the statement reiterated at the close.

Air Transat lays off half of its remaining flight attendants, closes Vancouver base
2020-10-20