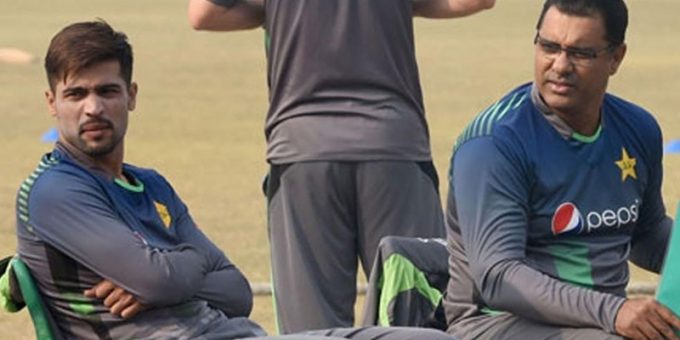 “Amir was already a part of the plans for white-ball cricket and we want to see how he performs given that he is an experienced campaigner,” he said while interacting with the media via videoconference. “We’ll see how the situation turns out.”

The Burewala Express said that the side has ample time on their hands to evaluate which fast-bowlers need to be picked.

“It is a big camp here in England and we have the facilities to try out new players. We can see where the players stand given that some important campaigns such as the New Zealand tour and T20 World Cup will take place in the future. It is important that such decisions are taken and I don’t think it is a bad one.”

The bowling
coach went on to say that his side are keeping a close eye on the ongoing Test
series between England and West Indies.

The three-match series is level at 1-1, with the final game to be played on July 24 in Manchester.

“We are keeping an eye on the ongoing Test series between England and West Indies and how the pitches are behaving there. There are just two performance centres, which are Southampton and Manchester. So, we have plenty of players at our disposal and have our basics covered. We will try to utilise the conditions and knowledge to our advantage.”

Saliva
ban not a concern

The former Pakistan captain also believes that the saliva ban imposed by the International Cricket Council as a safety precaution against the coronavirus will not cause problems for Pakistan’s bowling unit.

“That is because players have to adapt to the conditions and we had an idea about it when we arrived for the series well before it was scheduled to begin.”

Cyprus to suspend its citizenship for investment program
2020-10-13

Coronavirus: Study reveals three types of conditions that may increase the risk of COVID-19 death
2022-09-29