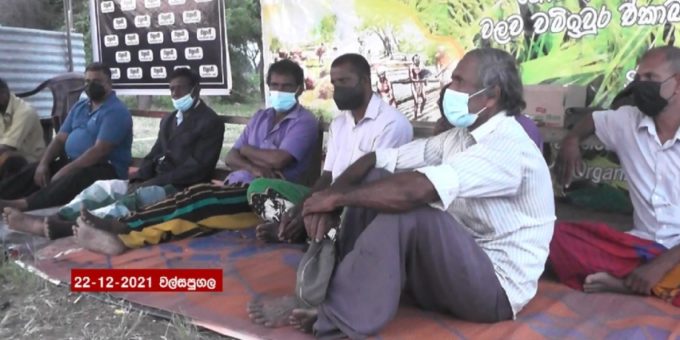 Farmers are now urging authorities to uphold their assurance and to enact the decision of creating a wild elephant management reserve in Hambanthota, as it was gazetted earlier this year.

86 farmers’ organizations, including the Left Bank United Farmers’ Organization have banded together and are currently engaged in a satyagraha opposite the entrance to the Hambantota International Port.

The Chairman of the Samadhi Farmers’ Organization, I. Gunathunga, speaking to media stated that his farmlands were destroyed by wild animals last night, and farmers continue to protest despite such events occurring.

A satyagraha was launched in Walsapugala on the 18th of January 2021, demanding for a wild elephant management reserve to be gazetted.

The satyagraha which lasted 105 days later ended, following an assurance from authorities to provide a solution to the matter.

However, farmers have now resorted to recommencing the satyagraha since a practical solution has not been provided since January.

Watch: How To Make Paneer Butter Masala For A Classic Punjabi Meal
2021-07-15