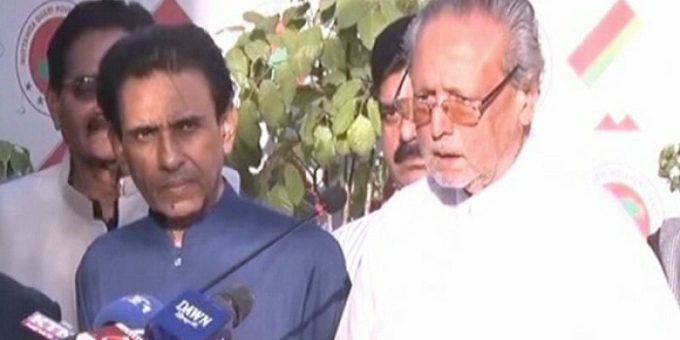 Former PTI member retired Justice Wajihuddin Ahmed on Thursday insisted that his statement about Prime Minister Imran Khan’s political aides paying for his household expenses was based on “truth”, saying if anyone wanted to file a defamation suit against him, “they must do so as the courts are open”.

He made these remarks during a press talk at the Muttahida Qaumi Movement’s (MQM) office in Karachi’s Bahadurabad, where he had gone to meet the party’s representatives for an unspecified reason.

Ahmed, while speaking on a programme on Bol News earlier this week, had claimed that the now-estranged PTI leader Jahangir Khan Tareen used to provide funds of up to Rs5 million per month for PTI chief Imran Khan’s household expenses, but offered no proof for the same.

“This belief is entirely false that Imran Khan is a [financially] honest man,” Ahmed said. “His condition is such that he hasn’t been running his household himself for years.”

Ahmed’s statement was denied by Tareen, who tweeted that he “never gave a penny for the household expenses of Banigala” — the palatial hilltop residence of Prime Minister Imran.

Ahmed, who was flanked by MQM’s Khalid Maqbool Siddiqui — the former IT minister whose party is a crucial ally of the ruling PTI, was asked by reporters today about the government’s decision to pursue legal proceedings against him for his statement. Unfazed, Ahmed replied that anyone could exercise their right to file a defamation suit.

Pausing as the call to prayer began during his media talk, Ahmed remarked that the “azaan is a testimony that an honest man is speaking”.

When questioned about Tareen’s denial of his claim, Ahmed said the sugar baron had no other option except to refuse to admit the “fact”. “These expenses are out of the books and are not accounted for. Hence it was easy for him to deny it,” he claimed.

The former Supreme Court judge also questioned the veracity of reports of sour ties between Tareen and the prime minister, asking “is he really on bad terms with Imran Khan?” He further claimed that no action was taken against the estranged PTI leader in the sugar scam probe.

“In that crisis, you earned … billions of rupees,” he said of Tareen and insisted that his statement was “expected”.

Earlier in the day, Information Minister Fawad Chaudhry had said a defamation suit would be filed against Ahmed for his claims about Tareen footing the bill for Imran’s household expenses.

Using Ahmed’s statement as a reference point, the information minister said it was being felt that media freedom was being used for specific campaigns to “weaken the system”.

“The way the prime minister was targeted is condemnable,” Chaudhry said, stressing that making money had never been on the premier’s agenda.