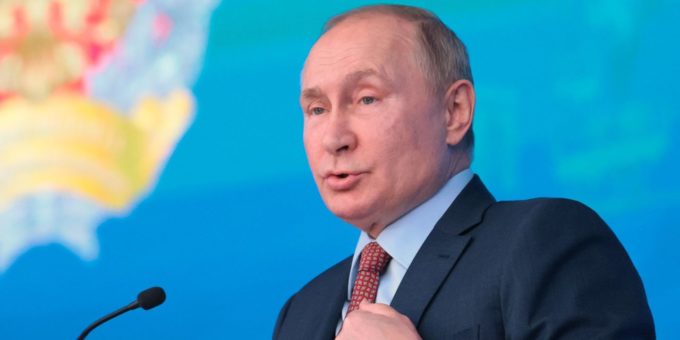 Russia has spent the fall massing troops and weaponry along Ukraine’s borders, laying the groundwork for a potential invasion. On Friday the Kremlin made its demands public. The U.S. and Europe have delivered a mixed response so far and will have to do more to deter

Moscow wants NATO to rule out eastward expansion and roll back military activity in a range of theaters, according to draft documents sent to the U.S. and allies this week. This would mean blocking Ukrainian accession to the alliance and effectively banning NATO forces from being stationed in member states like Poland, Estonia, Latvia and Lithuania.

“The line pursued by the United States and NATO over recent years to aggressively escalate the security situation is absolutely unacceptable and extremely dangerous,” a Russian foreign ministry official said, apparently without irony. “Washington and its NATO allies should immediately stop regular hostile actions against our country.”

Regarding “hostile actions,” Russia and Russian-backed forces invaded Georgia in 2008 and Ukraine in 2014. Both countries would like to join NATO but haven’t been granted membership. NATO has deployed token numbers of troops as a deterrent in the Baltic states and Poland, though only after Mr. Putin snatched Crimea in 2014.

Mr. Putin isn’t worried that Latvian troops will march on Moscow. His goal is Kremlin hegemony over Central and Eastern Europe, which have prospered under Western security and economic arrangements. His invasion threat is a power play to win concessions from Europe and the West such as President Biden’s decision in May to waive sanctions against the company behind the Nord Stream 2 gas pipeline from Russia to Germany.

Western officials have said Moscow won’t have veto power over NATO expansion, but the risk of concessions is always present. “There will be no talks on European security without European allies and partners,” White House press secretary

said Friday. NATO’s eastern flank should have a prominent role in talks, especially after they were rightly infuriated by a recent Biden proposal that only a few allies negotiate with Russia over Ukraine.

President Biden and European leaders have warned Mr. Putin that invading Ukraine would lead to the toughest sanctions to date, but it’s unclear how far they’d go. The U.S. has refused to target Mr. Putin or Russia’s access to the Swift financial clearing system despite repeated cyber attacks on the U.S.

Meanwhile, Mr. Biden continues to dawdle over providing more military assistance to Ukraine. Kyiv wants helicopters and other equipment that had been earmarked for Afghanistan before the Taliban takeover.

But the White House fears this would provoke Mr. Putin. This is the same logic that caused President

to refuse to send Javelin antitank missiles to Ukraine. President

sent the Javelins when he took office without repercussions. Arming Ukraine might not stop Mr. Putin from invading, but it would raise the cost if he does invade.

The White House has also lobbied Congress to hold off sanctions on Nord Stream 2. Mr. Biden seems to believe that improving trans-Atlantic relations requires deferring to narrow German economic interests, but NATO has 30 members and the European Union has 27. Many are unhappy with Mr. Biden’s approach.

Mr. Putin’s demands show his growing confidence, and perhaps a belief that the West will do nothing serious to stop him. Mr. Biden and Europe certainly haven’t so far.

How to cast your vote in KP polls tomorrow