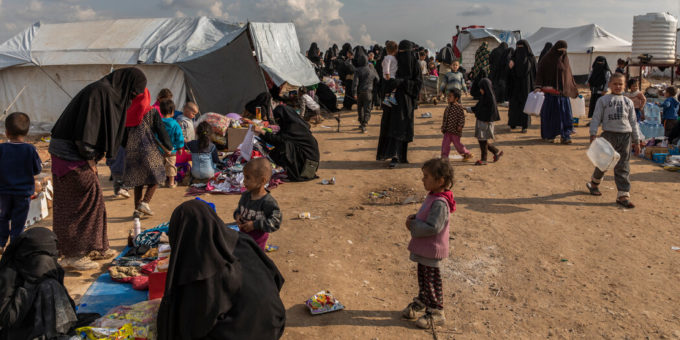 QAMISHLI, Syria — At a detention camp in northeastern Syria where tens of thousands of family members of Islamic State fighters have been held for years, guards opened fire at residents this week after women and children attacked them with rocks and knives, according to a top security commander for the region.

One child was killed and several women and children were wounded on Monday in the shooting, the commander, Newroz Ahmed, told The New York Times on Tuesday. It was the first time that guards in the sprawling Al Hol camp had opened fire on children, but only the latest episode of violence in a dangerous place that ISIS has increasingly infiltrated.

“Al Hol is now out of control,” said Abdulkarim Omar, an official with the administration of the Kurdish-led breakaway region in northeastern Syria that encompasses the camp.

The violence at Al Hol erupted at a time of escalating tensions in this region between the area’s dominant military power, the Kurdish-led Syrian Democratic Forces, or S.D.F., and resurgent ISIS militants.

The camp has been under heightened alert since an ISIS attack on a prison in the northeastern city of Hasaka, Syria, on Jan 20. Officials from the S.D.F., which is backed by the United States, have said that the ISIS plan was to free prisoners, then to move on to take control of Al Hol camp and other areas, hoping to gain a territorial toehold to try to re-establish their self-declared caliphate, which they lost three years ago. It took the S.D.F. almost two weeks to retake full control of the prison.

In the violence on Monday at Al Hol, Ms. Ahmed said security guards opened fire after a group of women and children, in a part of the camp that houses foreigners, attacked them with rocks and knives in an attempt to seize their guns. She and a camp official said the security forces were responding to a tent fire, possibly set deliberately to lure the forces into the foreigners’ annex.

The Aftermath of Syria’s Civil War

After a decade of fighting, many Syrians wonder if the country can be put back together.

“They tried to take the weapons from the security forces,” Ms. Ahmed said. “That’s why they attacked.”

The overcrowded and impoverished Al Hol camp holds almost 60,000 people, most of them children, who have been detained there since 2019. About 10,000 of them are non-Arab foreigners — almost all of them women and children — and the rest are mostly Syrian or Iraqi.

The administration of the breakaway region and its S.D.F. have long warned that they are unable to adequately secure the camp. The forces do regular sweeps, checking for weapons and seizing cellphones. Ms. Ahmed, a commander of the S.D.F., said they have found rifles, pistols and even machine guns.

Over the past year, the camp has been the scene of increasing ISIS violence, according to officials and aid workers in northeastern Syria.

Mr. Omar, the head of the foreign relations department for the regional administration, said that the S.D.F. had cracked down on sleeper cells in the camp, but that ISIS was still active there.

Most of the women there were married to ISIS fighters, and Ms. Ahmed and camp officials say ISIS cells run by women have thrived in the camp.

The violence broke out in a section of the camp housing about 10,000 women and children, most of them from Eastern Europe and Central Asia, as well as from dozens of other countries that have refused to repatriate them.

Thousands of other women and children, many from Western countries, have been moved to a smaller detention camp as Al Hol has grown more dangerous over the past year.

The security forces involved in the shooting included members of a female militia under the S.D.F. command that Ms. Ahmed oversees, as well as members of the region’s internal security force, which is under the control of the local Interior Ministry.

Ms. Ahmed said that one child was shot dead and that two other children and three women were wounded. One member of the security forces was also injured.

Killings are not unusual inside Al Hol, but they almost always involve ISIS members targeting camp residents and camp officials. The United Nations has said that about 90 Syrian and Iraqi camp residents have been killed over the past year, most of them by ISIS militants living inside the camp.

The Kurdish Red Crescent medical aid organization said one of its Syrian staff members was killed last month while working at the camp.

Save The Children, one of the few international aid organizations that operates in Al Hol, said it was “appalled at the news that at least one child has been killed and others injured after security forces opened fire” in the camp.

“This latest incident is a stark reminder of the dangers that children face every day in the camp,” said Sonia Kush, the director of the group’s Syria Response unit. “Their governments need to take them and their families home to safety immediately.”

The child who was killed was a boy from Turkmenistan and his age was unknown, one aid official said, speaking on the condition of anonymity because he was not authorized to talk publicly about it. The two wounded children were 8 and 10, the official said.

Almost all of the camp residents were detained after ISIS fell three years ago, when tens of thousands of fighters and their families emerged from the ruins of the town of Baghuz, Syria.

Ms. Ahmed said that in the absence of rehabilitation programs, many of the children in Al Hol camp have become increasingly radicalized by the women raising them.

“They always say, ‘It is our duty to raise our children in the ideology of the caliphate,’” she said.