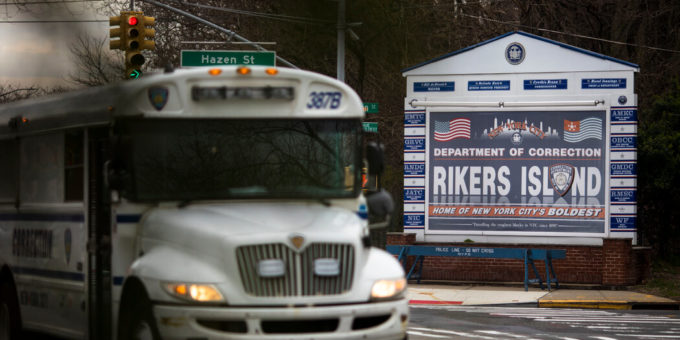 Five years ago, the city entered a landmark legal settlement with federal prosecutors, promising to stamp out the culture of violence inside its jail complex on Rikers Island, a place where officers regularly used excessive force on inmates.

But a federal monitor appointed to oversee the troubled jail system has found that little progress has been made curbing the brutality of guards and that violent incidents have risen sharply since 2016, remaining at an “all-time high.”

On Thursday, the prosecutors said the city had failed to abide by its promises, even as they announced yet another agreement with the administration of Mayor Bill de Blasio to fix the endemic problems that have plagued the city’s jails.

Mr. de Blasio and leaders in the City Council have already agreed to close the jail complex, which is one of the country’s largest urban prisons and has a long history of violence and abuse against a largely minority inmate population. The city is moving ahead with an $8 billion plan to replace it with four smaller jails by 2026.

From 2016 to 2019, the average number of times guards used force each month rose to nearly 600 from about 390 — a 54 percent increase — at the same time the jail population was falling, according to a May report by the monitor to a federal judge in Manhattan. Taking in account the jail population, the number of times force was used per inmate more than doubled over that period.

Audrey Strauss, the acting United States attorney for the Southern District of New York, said on Thursday that the monitor’s reports show the city and the Department of Correction “have failed to fulfill core obligations” under the 2015 settlement, which was reached as part of a class-action lawsuit called Nunez v. City of New York.

She said her office had reached a new agreement with city officials to fix the problems that continued to plague the jail system. The proposed new remedial measures were submitted to a federal judge for approval late Wednesday.

“While this office recognizes that changing a decades-long culture of violence is not a simple task, the city and D.O.C. must do better,” Ms. Strauss said.

Nick Paolucci, a spokesman for the city’s Law Department, said the city had worked with the monitor and the U.S. attorney’s office to develop the remedial measures.

“We are committed to implementing them, as well as all the Nunez reforms, to further the safety of everyone on Rikers,” Mr. Paolucci said.

But the new measures immediately drew criticism on Thursday from Benny Boscio Jr., president of the Correction Officers’ Benevolent Association, the union that represents the city’s jail guards.

He said the proposed steps “are straight out of the Legal Aid playbook, one-sided and only concerned with compromising the safety of our officers by treating them like the criminals they are charged to supervise.”

Mary Lynne Werlwas, a lawyer with Legal Aid, said the organization was glad to have reached the new agreement with the city and if the court approved it, “we will vigilantly enforce it.”

In 2014, the U.S. attorney’s office, after a two-and-a-half year long investigation of conditions in the facilities for adolescents at Rikers, issued a blistering report that found a “deep-seated culture of violence” directed at inmates, and a systemic deprivation of their civil rights.

Later, the prosecutor’s office, under the U.S. attorney at the time, Preet Bharara, joined the existing Nunez class-action lawsuit, which had been brought by Legal Aid and private law firms.

The 2015 settlement included new policies restricting the use of force by guards, the installation of thousands of wall-mounted video surveillance cameras at the complex and the appointment of the monitor.

In his report in May, the monitor, Steve J. Martin, a lawyer and national corrections expert, said that the jail’s staff appeared to “utilize force more often now” than when the agreement went into effect.

Mr. Martin cited what he called “a pattern of unprofessional conduct and hyper-confrontational behavior by staff,” the misuse of pepper spray on inmates, the use of “painful escort techniques” and the “improper use of head strikes.”

The judge who continues to oversee the case, Laura Taylor Swain of Federal District Court, said in an order in June that the report’s findings were of “great concern.”

The new agreement requires the city speed up the prosecution of disciplinary cases against officers accused of excessive force and immediately discipline officers when federal monitor recommends it.

The city also agreed to assign more senior supervisors to the jails to oversee correction captains and to evaluate the mental health of inmates who have been involved in repeated conflicts with guards and determine if the existing rules for handling those inmates are appropriate.

But Insha Rahman, an expert on bail reform and reducing jail populations who works at the Vera Institute of Justice, said the proposed steps the city had agreed to were unlikely to change what she called a “culture of violence and fear,” because they continued to rely on the Correction Department to police itself.

The proposed remedial order, she said, was “meaningful inasmuch as it underscores the immediate and urgent need for culture change at Rikers Island, but what it lacks is real teeth.”

“Many of the oversight provisions in the order simply ask the fox to mind the proverbial henhouse,” she said.

Ms. Strauss’s office, in its statement, said the correction department had made “some significant improvements” in other areas, including the surveillance cameras, new training programs and the elimination of punitive segregation for inmates under the age of 22.