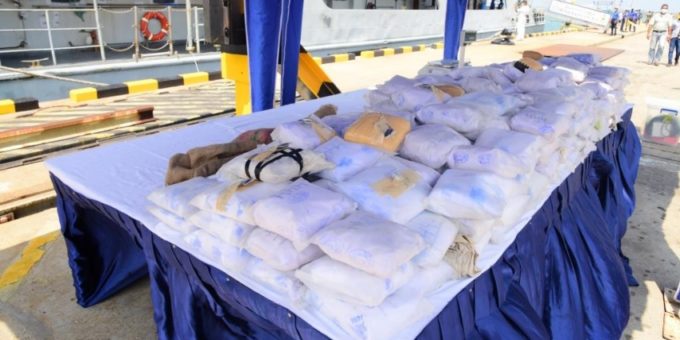 COLOMBO (News 1st); In a successful operation carried out in international waters south of Sri Lanka, the Navy managed to seize a haul of heroin, with 11 suspects and 02 local fishing vessels on 17th and 22nd January 2022 and they were brought to the port of Colombo on Tuesday (24).

Defence Secretary, General (Retd) Kamal Gunaratne and Commander of the Navy, Vice Admiral Nishantha Ulugetenne were also present at the Colombo harbour to inspect the apprehended consignment of narcotics.

The consignment heroin in 309 packages, which had been stuffed in 13 sacks, weighed approx. 343kg 456g (including packages).

The street value of the seized consignment of illegal drugs is believed to be over Rs. 3400 million.

Seized stock of heroin together with the suspects and local fishing trawlers were handed over to the Police Narcotic Bureau (PNB) for onward legal proceedings. Meanwhile, the Navy and PNB are conducting further investigation into this incident.

The Defence Secretary and Commander of the Navy, who arrived at the port of Colombo to inspect the narcotics and local multi-day fishing vessels, heaped praise on the crew of SLNS Samudura and expressed their gratitude to the Commanding Officer and his men for their successful drug bust on high seas, supporting the government’s efforts to protect the future generation from the drug menace.

Sri Lanka Navy – the country’s First Line of Defence, says it is committed to coordinating with other law enforcement authorities, to carry out anti-drug operations of this nature in order to foil drug smuggling attempts being made in the guise of fishing.

Yash starrer KGF to get a third instalment? Here’s what director Prashanth
2022-06-28