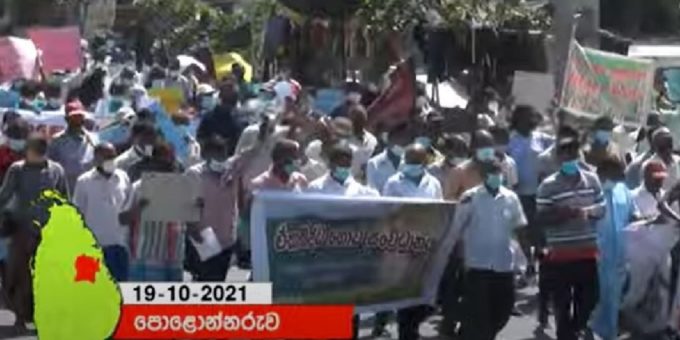 (Note to the reader : This report contains multiple videos)

COLOMBO (News 1st); Hundreds of farmers in Polonnaruwa protested on Tuesday (19) rejecting any government attempt to import waste under the guise of importing organic fertilizer to the country.

“We have no party difference. We are here in unsion demanding fertilizer for the farmer community,” said one local farmer.

Some alleged that the decision makers have no understanding of the local agriculture standards, and thus they have caused a shortage in much needed fertilizer.

At the same time, another massive protest took place in the Mahaweli H Zone, also demanding fertilizer for cultivations.

A tensed situation arose when a lorry attempted to move pass the protestors, compelling local law enforcement to intervene to calm the situation.

“What we are showing is the might for the farmers and there is no politics involved here. We ask for at least half the quantity of chemical fertilizer and for the best quality compost,” echoed several farmers.

Effigies of political leaders were set on fire at another demonstration in Ambalantota, also demanding fertilizer.

For months, Farmers across many areas in Sri Lanka have been protesting against the shortage of fertilizer in the country.

The ban on chemical fertilisers — widely used in the tea and rice industries — was opposed by farmers who staged protests after reporting failing vegetable crops as existing stocks began to run out within weeks.

The promulgated regulation restricting and banning the import of fertilizers and agrochemicals is leading to widespread concern among Sri Lanka’s farmer community, industry associations, practitioners, and agricultural professionals.

Activities all couples should do together

England vs West Indies 1st Test: When And Where To Watch Live Telecast, Live Streaming
2020-07-07