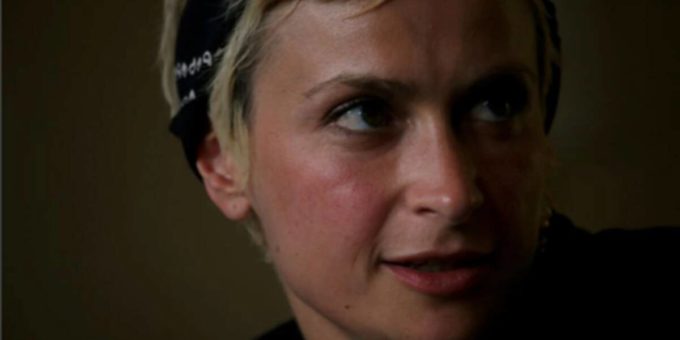 The crew was setting up a difficult shot during filming on the New Mexico set of Rust, and the movie’s cinematographer, Halyna Hutchins, wasn’t quite satisfied.

She turned to Lane Luper, a member of the camera crew, who suggested some adjustments that she found worked perfectly. That kind of collaborative spirit, Luper said at a candlelight vigil on Saturday, was what made Hutchins such a joy to work with.

“Her photography was beautiful, and every day, everybody on the camera team was proud to be there for her, because we were proud of what we were creating – what she was creating,” he told the crowd, two days after Hutchins was killed in an accident when actor Alec Baldwin fired a prop gun on set.

Luper said he would have been lucky to work with her again. “And I don’t get to. And it sucks,” he said, breaking into tears.

While organizers emphasized that the vigil in Albuquerque, New Mexico, was to honor Halyna Hutchins’ memory, rather than focus on her death, some in the crowd held signs that read “Safety on Set,” a reminder that the circumstances surrounding Thursday’s shooting remain murky.

Details have emerged suggesting the production was troubled before the accident. Several crew members walked off the set at the Bonanza Creek Ranch, south of Santa Fe, just hours before the incident, protesting what they saw as poor working conditions, several media outlets reported.

Last week, Alec Baldwin’s stunt double accidentally fired two rounds with a prop firearm after being told it was “cold,” an industry term meaning a weapon is not loaded with ammunition, the Los Angeles Times said. At least one employee complained to a production manager about gun safety on set, the newspaper reported, citing unnamed crew members.

The same mistake may have occurred on Thursday, according to court records. An assistant director, Dave Halls, handed Baldwin the prop gun and told him it was a “cold gun”, according to an affidavit from the Santa Fe County Sheriff’s Office.

When Baldwin fired the gun, Hutchins was fatally struck in the chest, according to the sheriff’s office.

It is unclear why the gun contained a projectile. The person in charge of weapons on set is known as an armorer. The armorer for Rust, Hannah Gutierrez, had set up the gun and two others, according to the affidavit.

Halls and Gutierrez could not be reached for comment on Saturday.

Rust Movie Productions said in a statement on Friday it had not been aware of any safety concerns but was investigating the incident.

“Though we were not made aware of any official complaints concerning weapon or prop safety on set, we will be conducting an internal review of our procedures while production is shut down,” the company said. Baldwin is among the film’s producers.

About 200 mourners attended Saturday’s vigil, including set decorators, prop masters and costume designers. Actors Jon Hamm and John Slattery, who co-starred in the television hit Mad Men and are working on a movie in nearby Belen, also joined.

Slattery, who is directing the movie starring Hamm, told Reuters members of his crew were friends with Halyna Hutchins, and Hamm said the pair “came to support our community”.

A speaker at the vigil also read aloud a statement from Hutchins’ husband, Matt.

“Halyna inspired us all with her passion and vision, and her legacy is too meaningful to encapsulate in words,” he wrote. “Please take time to remember her, and we will all work together to honor her memory and emulate her determination and her creativity.”

Alec Baldwin, 63, best known for his roles in TV comedy 30 Rock and his Saturday Night Live impersonations of former U.S. President Donald Trump, said on Friday he was shocked and heartbroken at Hutchins’ death and was fully cooperating with authorities.

Earlier on Saturday, the director of Rust, Joel Souza, who was wounded in the shooting, addressed the incident for the first time, saying that he was “gutted” by Hutchins’ death.

“She was kind, vibrant, incredibly talented, fought for every inch and always pushed me to be better,” Souza said in a statement. He was hit in the shoulder while standing behind Hutchins, according to police. He was treated at a local hospital and released.

No charges have been filed in the case, and police have said the investigation remains active. Security guards were posted at the road leading to the ranch on Saturday.

The American Film Institute set up a scholarship fund for female cinematographers in Halyna Hutchins’ honor.

Kunal Kemmu and Shweta Tripathi’s next Kanjoos Makkhichoos is based on a heartwarming super hit Gujarati play : Bollywood News