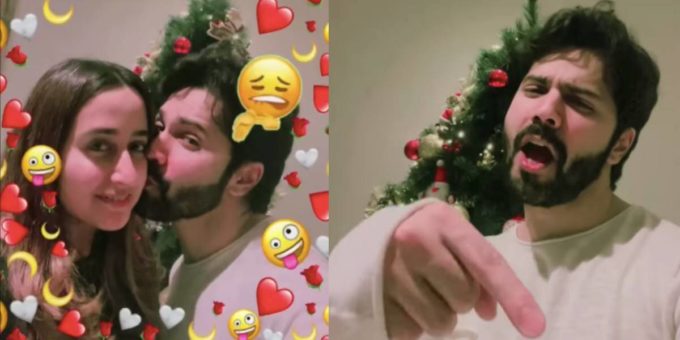 Actor Varun Dhawan’s wife Natasha Dalal likes to stay low-key and is barely seen on social media. However, the actor convinced her to make an Instagram reel with him. He shared a video on the social media platform featuring himself and Natasha.

In the video, Varun kisses Natasha adorably. In the background of the reel, the actor added the song “Hat Ja Samne Se Teri Bhabhi” from his film Coolie No. 1. Explaining why he chose the song and how he made Natasha do an Instagram reel with him, the actor wrote in the caption, “Teri bhabhi khadi hai ♾ I had to tell natasha IL shoot this with someone else for her to agree to do this. She may never do another reel with me haha but she knows how much I love this song and how happy I am that it’s trending after an entire year so she obliged.”

Sara Ali Khan, Mouni Roy, Sophie Choudry and Maniesh Paul left heart emojis on the video. Many fans of Varun were happy that he shared his first Instagram reel with his wife. One of them commented, “Oho first official reel with the real bhabhi❤️✨🥺” Another added, “So sweet video varun bhai.”

Varun Dhawan and Natasha Dalal got married in an intimate ceremony in Alibaug on January 24. The dreamy affair was attended by only family members and close friends including Karan Johar, Manish Malhotra, and Kunal Kohli. Varun shared the news about his marriage on social media. Along with photos from the wedding, the actor wrote, “Life long love just became official ❤️.”

Earlier, talking to Kareena Kapoor Khan on her chat show, ‘What women want’, Varun had shared how he fell in love with Natasha. He said, “I actually met Natasha in the 6th standard. We were friends till 11-12th. We were very close friends. I remember seeing her for the first time. We went to Maneckji Cooper. It was on the basketball court that I saw her and I fell in love with her that day. That was it! She rejected me 3-4 times, but I didn’t give up hope.”

Libyans in the dark over election with seven days to go