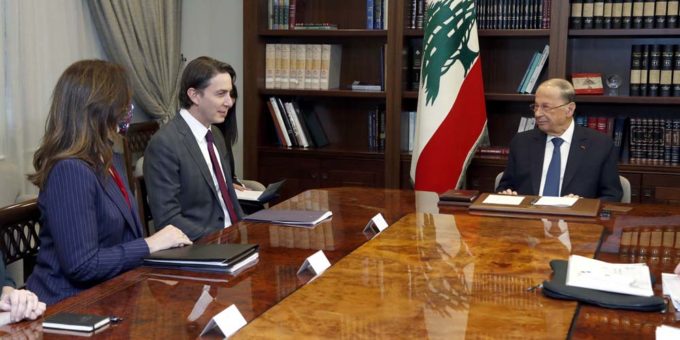 BEIRUT: The US embassy in Lebanon recently announced on social media that “an agreement on the maritime borders between Lebanon and Israel could create a much-needed opportunity to achieve prosperity for Lebanon’s future,” noting that “where there’s a will, there’s a way.”

Amos Hochstein, the US envoy for energy affairs, who is mediating the indirect negotiations between Lebanon and Israel to demarcate maritime borders, held a meeting with Lebanese Army chief Gen. Joseph Aoun on Wednesday, which the US embassy described as “fruitful.”

Hochstein arrived in Beirut on Tuesday to explore ways to resume Lebanese-Israeli maritime border demarcation talks, which stalled back in November 2020.

During his 48-hour visit to Lebanon after his stop in Israel, Hochstein held a series of meetings with Lebanese officials including President Michel Aoun, Speaker of the Parliament Nabih Berri, and Prime Minister Najib Mikati, whose media office said that Mikati would “discuss Hochstein’s new proposals with Aoun and Berri to determine the Lebanese position.”

The Lebanese Army’s Directorate of Guidance said that General Aoun had assured Hochstein that “the military institution supports any decision the political authority takes in this regard.”

Upon his arrival in Beirut, Hochstein met with Foreign Minister Abdullah Bou Habib in the presence of US Ambassador to Lebanon Dorothy Shea.

According to leaked information, they discussed the letter that President Aoun sent on Jan. 28 to the president of the UN Security Council, which stressed that Lebanon “reserves all rights to raise any subsequent demands and review the borders of its exclusive economic zone … if indirect negotiations fail to achieve a settlement.”

Hochstein reportedly presented Bou Habib with “a series of proposals that he deems appropriate regarding the next stage, given the necessity to take urgent steps that lead to economic and financial breakthroughs for Lebanon, including speeding up Lebanon’s investment in its oil and gas wealth.”

Hochstein also met with Maj. Gen. Abbas Ibrahim, director general of General Security, on Wednesday to discuss the issue further, having met with several journalists on the sidelines of his participation in a symposium at the May Chidiac Foundation on Tuesday.

“We have an opportunity today. We have narrowed the gaps on the issue of maritime border demarcation and we can reach an agreement,” Hochstein was quoted as saying. He added: “We will not be the ones to conclude the agreement. Lebanon and Israel must decide to do so.”

In conjunction with Hochstein’s visit to Beirut, Hezbollah Secretary-General Hassan Nasrallah spoke disparagingly about the US embassy’s involvement in the talks.

Speaking to the Iranian Al-Alam channel about the demarcation of the maritime borders, Nasrallah said: “The US influence in Lebanon is there. There is no US occupation, but rather political, financial and military influence. There are no US military bases in Lebanon, but the US has a presence in the military institution, and there are US officers in Yarzeh (the headquarters of the Lebanese Army), and the US ambassador is always there.”

Nasrallah added: “Hezbollah did not interfere in these negotiations, but if any suspicion of normalization were to appear, we would stand against it,” he continued.

On Wednesday, Lebanese officials participated in a festive mass on the occasion of the feast of Saint Maroun, the patron saint of the Maronite community in Lebanon.

Maronite Patriarch Bechara Boutros Al-Rahi stressed in his sermon the Maronite influence in Lebanon, saying: “The Maronites lived through all conquests and experimented with various forms of constitutional formulae in Mount Lebanon, so they knew the advantages and disadvantages of each formula, and when they got a position of influence, they chose to belong to the Arab environment.”

He noted: “We are all fighting so that Lebanon stops being a battlefield for regional quarrels. The state of Lebanon was not founded to be the enemy of its brothers and friends. Recognizing Lebanon as a homeland means recognizing three constants, namely coexistence, the Christian role, and loyalty to Lebanon alone. By respecting this historical triangle, we will save Lebanon’s unity and prove its neutrality.”

Al-Rahi addressed the president directly, calling for “parliamentary and presidential elections as scheduled, revealing the truth about the Beirut port blast, accelerating the process of reform and agreement with the IMF, completing the implementation of the Taif Agreement, addressing the loopholes resulting from it, seeking UN assistance to convene an international conference, and adopting positive neutrality as a basis in our foreign relations.”

Derick Dillard: Jim Bob Duggar Forced Jill to Talk to the Media About Being Molested By Josh
2022-02-12