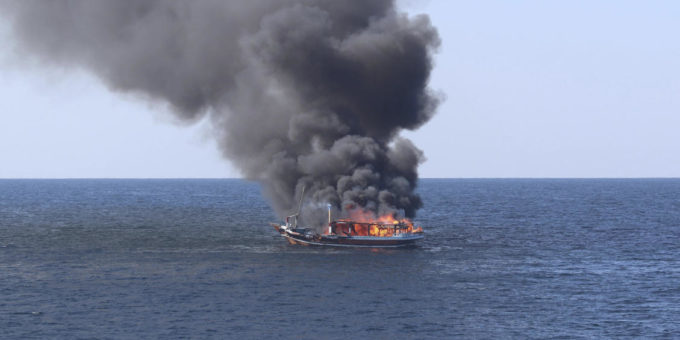 US should consider military option against Iran, says panel of former elected US officials and diplomats

WASHINGTON: US President Joe Biden should consider a military option as a means of pressuring Iran to back down from its pursuit of nuclear weapons and aggressive drone program, a panel of former elected US officials and diplomats told an audience on Wednesday.
The panel was hosted by the National Council of Resistance of Iran, and featured Joseph Lieberman, a former US senator; Robert Joseph, a former under secretary of state for arms control and international security, and special envoy for nonproliferation; David Shedd, former acting director of the Defense Intelligence Agency; Georgetown University Professor Matthew Kroenig; and Jonathan Ruhe, foreign policy director for the Jewish Institute for National Security of America.

The NCRI released a detailed study of how Iran is using drones to strike targets in Lebanon, Iraq, Yemen and Saudi Arabia, and building alliances with China, Russia and Venezuela.

“This is causing worry among our allies in the region that they can’t depend on us,” Lieberman told the NCRI audience in Washington.

He added: “We’re on the wrong course in the US in our efforts in Vienna to re-enter the JCPOA (nuclear deal). They are well-intentioned, but they don’t meet the realities of what Iran is doing in Vienna or the world. They are highly risky. It’s not only important that the US toughens our position, to step back from the negotiations as they are happening now, but also to move toward more containment and constraints against the regime.”

Lieberman said: “The Iranian regime that now returns to the JCPOA in Vienna is a regime that has recklessly violated the most compelling and important terms of the agreement, enriching uranium to a very dangerous level.”

The JCPOA is the Joint Comprehensive Plan of Action signed in 2015 to relieve sanctions on Iran if it backs down from its nuclear weapons program and allows international inspections.

Calling Iran “a deplorable regime,” Joseph argued that best strategy would be to strengthen the growing resistance inside the country which has been putting pressure on the regime, which is using the JCPOA negotiations as a means of expanding its nuclear, drone and ballistic missile programs.

“The (Biden) administration should step back from the negotiations and define success. Right now, we are projecting weakness,” Joseph said in response to a question from Arab News.

Kroenig said the US needs to step up the pressure.

“We are relying too heavily on the engagement (negotiations) tract. We should put the military option back on the table. President Biden should say he is willing to use force,” Kroenig said.

“We need to have a stronger pressure track. The regime needs to understand that if it remains on its current path, there will be consequences. Supporting the democratic aspirations of the Iranian people is important. And, finally, we must keep a military option on the table as a last resort to prevent Iran from building a nuclear weapon.”

Ruhe agreed, adding the Biden administration should set a deadline for the talks “after which it would be prepared to set up credible military actions.”

All agreed that Iran’s regime is not taking the 2015 nuclear deal seriously.

NCRI Deputy Director Alireza Jafarzadeh said that despite Iran’s expansion of its drone campaign and refusal to abandon its push for nuclear weapons, the regime is “much weaker than it was in 2015.”

But he said that weakness stems from resistance groups inside Iran that provide extensive details on Iran’s nuclear and drone programs that the NCRI shares with the world.

“The Biden administration should make democracy and human rights a central element of its foreign policy regarding Iran instead of trying to find a way to deal with the repressive regime,” Jafarzadeh said.

He said the world should pursue war crimes charges against Iran’s recently elected President Ebrahim Raisi, who should be held accountable for his policies and past genocide.

Raisi is accused of overseeing widespread civilian killings in 2018 as a leader of Iran’s “Death Commission,” which sentenced thousands of political dissidents to execution.

Jafarzadeh said: “Iran is in serious violations of the agreements worked out in 2015. They have been in violation since day one. All the evidence shows they have three new (nuclear program) sites.”

The NCRI released a six-page summary of its findings, which conclude that the 2015 nuclear deal has been ineffective in forcing Iran’s regime to back down from its nuclear weapons program or drone expansion.

Ruhe said studies show that Iran’s use of drones to strike at targets has tripled in recent years.

THE NCRI report identified 15 companies that are being used as “fronts” for Iran’s terror drone program.

Anil Kapoor and Boney Kapoor Not on the Same Page Regarding Mr India Remake?
2020-03-18