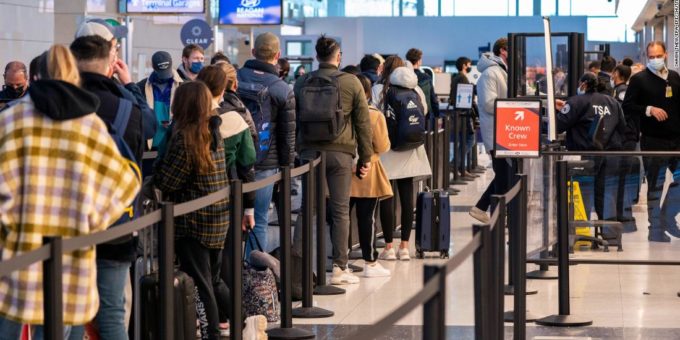 “It ought to redouble our efforts to use the tools that we have, which are vaccinations and boosters — and to be sure we’re getting those to the rest of the world, too,” Collins told CNN on Sunday.

“It also means we need to pay attention to those mitigation strategies that people are just really sick of, like wearing masks when you’re indoors with other people who might not be vaccinated, and keeping that social distance,” he said.

“I know, America — you’re really tired of hearing those things. But the virus is not tired of us. And it’s shapeshifting itself.”

Why Omicron ‘looks different’ from other variants

“We have seen a lot of variants pop up over the last five, six months, and most of them have not amounted to much. This looks different,” said Dr. Ashish Jha, dean of the Brown University School of Public Health.

The Omicron variant has an unusually high number of mutations, with more than 30 mutations in the spike protein alone, South African genomic scientists said last week.
Spike proteins are the structures used by a virus to get into the cells it attacks.

And “10 or more” of the mutations are on the receptor binding domain, which “binds to the cells in your nasal pharynx and in your lung,” Dr. Anthony Fauci told NBC on Sunday.

“In other words, the profile of the mutations strongly suggest that it’s going to have an advantage in transmissibility,” the director of the National Institute of Allergy and Infectious Diseases said.

When experts looked at other variants, Jha said, it usually took several months for those strains to be dominant — in other words, the most common strain of the virus spreading in one area.

“This one has become dominant very quickly in South Africa in the regions where it’s been found — within a matter of days to weeks, as opposed to months,” Jha said.

“Now, the number of cases in South Africa is quite low, so it can be for other reasons as well — not just because it’s more transmissible. But the speed with which it has taken off is really unlike anything we’ve seen before.”

Collins said it’s not yet clear whether the Omicron variant is more contagious than the Delta variant.

“It certainly shows the signs of being able to spread quickly,” he said. “What we don’t know is whether it can compete with Delta.”

Dr. Celine Gounder, an infectious disease specialist and epidemiologist, told CNN’s Jim Acosta the “major takeaway” is “there’s still much we do not know about Omicron.”

“We’re still learning, and I think that as we were saying very early in the pandemic, pandemics are not about panicking,” she said. “They’re about policies, protocols and practice. And in this case that means doing the work of characterizing the virus.”

A growing number of countries have reported confirmed cases of the Omicron variant, including Canada, where health officials on Sunday confirmed two cases in Ottawa, Ontario.
Both people had recently traveled from Nigeria and are in isolation, Deputy Premier and Minister of Health Christine Elliott and Chief Medical Officer of Health Dr. Kieran Moore said in a joint statement.

If the Omicron variant isn’t already in the US, it’s bound to be “soon,” said Dr. William Schaffner, a professor at Vanderbilt University Medical Center.

“It’s going to make its way around the world. It looks like that way,” Schaffner said Saturday, which might prompt a return to stricter Covid-19 mitigation efforts.

“I think we may, indeed, be in for a phase of many more masks, much more social distancing, and more restrictions and obligations for vaccination going forward,” Schaffner said.

News of the variant spread as Americans packed airports at almost pre-pandemic levels for Thanksgiving and at the start of the holiday season: The Transportation Security Administration said it screened about 2.3 million people at airports across the country Wednesday, making it the busiest day at security checkpoints since March 2020.

More reason to get vaccinated or boosted

While vaccine makers test their shots against the new Omicron variant, health experts said it’s important for anyone eligible to get a Covid-19 vaccine or booster to do so now.

“The main things people can do to protect themselves right now is if you’re not vaccinated, get vaccinated,” Gounder said. “If this does turn out to be an immune-evading variant, there may also well be benefit in getting an extra dose or booster dose of vaccine.”

Fauci said he believes the current vaccines — and especially booster doses — will help at least somewhat against the Omicron variant.

“When you get boosted, the level of your antibody goes way, way above what the level at its peak was after the second dose,” Fauci told NBC.

“And that’s the reason why we feel even with variants like Omicron that if you get boosted, you’re going to get a level of antibody that’s high enough that it is likely you’ll be able to get at least some degree and maybe a lot of protection against this.”

Moderna said it’s testing the ability of its Covid-19 vaccine to neutralize Omicron, and data is expected in the coming weeks.

The company said it’s also testing a larger-dose booster and an Omicron-specific booster in case the current vaccine and booster don’t sufficiently work against Omicron.

BioNTech, the German company that partnered with Pfizer to make a Covid-19 vaccine, is also investigating Omicron’s impact on their vaccine, with data expected in the coming weeks.

Johnson & Johnson said it’s also testing the effectiveness of its vaccine against Omicron.

Moderna said the Omicron variant could be a challenge.

“The combination of mutations represents a significant potential risk to accelerate the waning of natural and vaccine-induced immunity,” the company said Friday.

But Jha said he doesn’t think the new variant means “vaccines will be rendered useless.”

“I think that’s exceedingly unlikely,” he said. “The question is, is there a tiny hit to vaccine efficacy, or is there a large hit?”

‘The virus is still in control … tighten your seat belts’

With or without the Omicron strain, the US is still struggling with the Delta variant.

Covid-19 hospitalizations in 16 states increased by more than 50% in the past week compared to the previous week, according to the US Health and Human Services Department.

“I think we need to just get our mind set that the virus is still in control. I don’t care about your Covid fatigue,” Schaffner said.

“We’re going to have to deal with this in an ongoing way very, very seriously. … Tighten your seat belts.”

Mahesh Babu starrer Maharshi has been postponed; will now RELEASE in May
2019-03-07