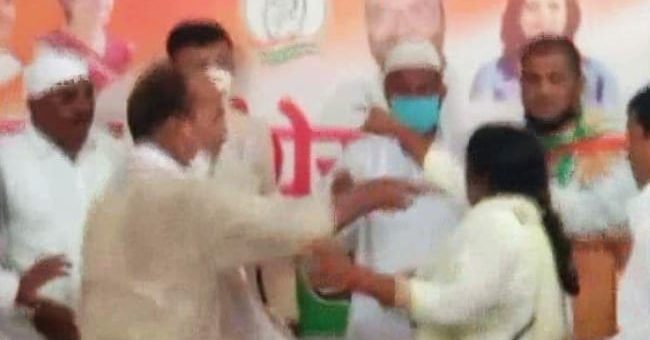 There were allegations that Tara Devi threw a bouquet at National Secretary Sachin Nayak.

A woman Congress worker in Uttar Pradesh was thrashed at an internal meeting of the party after she objected to the nomination of the party candidate from Deoria, saying he is an accused in a rape case. “On the one hand, our party leaders are fighting for justice for the Hathras woman, and on the other hand, party ticket is being given to a rapist. It is a wrong decision. It will malign the image of our party,” news agency ANI quoted Tara Devi Yadav as saying.

Cellphone videos that are being widely circulated show Tara Devi being punched and pushed around by a group of men. She was finally rescued by a couple of others who led her away.

In her complaint to the police, Tara Devi has named Congress district president Dharmendra Singh, vice president Ajay Singh and two others for the attack. She has also accused them of abusing and molesting her.

The Townhall for the by-polls is being held in Deoria, where the Congress has named Mukund Bhaskar as the candidate for the seat which was left vacant after death of BJP MLA Janmejay Singh.

There were allegations that Tara Devi — who came to the meet with three other women party workers — threw a bouquet at the party’s national secretary Sachin Nayak. Soon a fight started during which the woman was hit.

“We wanted the party to reconsider its decision,” Tara Devi was quoted as saying by ANI. “I didn’t hit Sachin Nayak. I just wanted to ask why he (Mukund Bhaskar) was given the ticket and then I was thrashed.”

The attack comes in the backdrop of the alleged gang-rape and brutalisation of a 20-year-old who belonged to the Scheduled Castes from Hathras, which has evoked outrage across the country.

After battling for life for two weeks, the woman had died at a Delhi hospital. The police cremated her body the same night, keeping her family locked up inside their house. The four upper caste men accused in the case have denied all allegations. The forensic reports of the case – for which the samples were collected days after the alleged event – have negated rape.

The Congress has been on the forefront of the attack on Yogi Adiyanath government, over the police handling of the case.

“When a woman worker objected to the fielding of a rape accused Congress leaders thrashed her. The NCW (National Commission of Women) should take note of this incident and ensure that the accused get strong punishment,” his Hindi tweet, roughly translated, read.

“How all these sick minded people come in politics..??  Will be taking cognizance,” tweeted Commission chief Rekha Sharma.

The embarrassed state unit of the Congress expelled two members and termed the incident a “political conspiracy” to defame the party.

“In the context of by-polls to the Deoria assembly constituency, a meeting was held at the party office in Deoria on October 10. In this meeting, Deendayal Yadav and Ajay Kumar Sainthwar indulged in indiscipline, and have been expelled from the party with immediate effect,” read a statement from the party, which has also formed a three-member panel to investigate the issue.

Urvashi Rautela on her homecoming after winning Miss Diva 2015 – “I was the Shah Rukh Khan and Amitabh Bachchan of that moment” : Bollywood News
2022-02-25

Have Leftover Rice? Make Yummy Rice Cutlets With Them For Evening Tea
2021-11-02