Akhilesh Yadav – whose Samajwadi Party was served an Election Commission notice last week for violating Covid safety protocols – today tweeted a video of a BJP MLA holding a roadshow – also in violation of the rules – in Uttar Pradesh’s Amroha ahead of next month’s election.

A frustrated Mr Yadav demanded the top poll body act uniformly against all parties that disobey Covid protocols as announced both by the government and itself.

“There is a complete ban on the office and programmes of the Samajwadi Party… but the Chief Minister ‘who has a few days left’ – a swipe at Yogi Adityanath losing the election – and the BJP candidate from Amroha are openly making fun of the Model Code and Covid guidelines,” he said.

The video shared by Mr Yadav shows hundreds of people – several without face masks – campaigning with utter disregard for social distancing, and an order from the Election Commission that prohibits rallies, roadshows, nukkad sabhas (roadside meetings) or other public events till January 22.

Both the BJP and the MLA in question, Mahendra Kharagvanshi, have yet to respond.

On Saturday the Election Commission demanded an explanation from the Samajwadi Party after a large number of people gathered for what was supposed to be the ‘virtual’, or ‘online’, induction of seven ex-BJP MLAs, including ministers Swami Prasad Maurya and Dharam Singh Saini.

A case was registered against 2,500 people – allegedly Samajwadi Party workers. 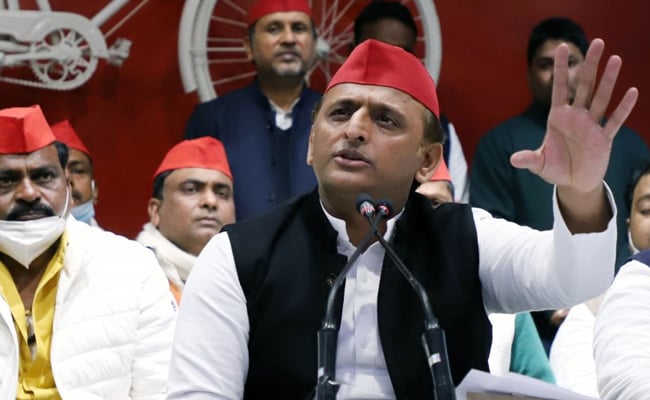 Elections in five states – UP, Goa, Manipur, Uttarakhand, and Punjab – have been scheduled over the next two months despite a frightening surge in Covid cases and concerns that poll rallies and roadshows, which are attended by thousands, could become super-spreaders.

The Election Commission turned down requests, including one by the Allahabad High Court, to postpone polls, citing the Constitution and saying measures – like the ban on rallies and roadshows, which seems not to be properly enforced – would serve to stop the virus from spreading.

The poll body has since also acted against the Congress – Chhattisgarh Chief Minister Bhupesh Baghel was yesterday named in a police case while campaigning in UP’s Noida.

Similar measures were announced as five states – Bengal, Tamil Nadu, Puducherry, Assam, and Kerala – voted in March-April last year, but the rules were violated then too, and cases surged.

Coronavirus vaccine frontrunners: Vaccine candidates that are most promising
2020-07-26