Action by Central agencies against the BJP government’s rivals and critics has witnessed a massive spike since the BJP-led government came to power in 2014, an NDTV analysis has found.

Since 2014, Central agencies have targeted a whopping 570 of the government’s political rivals and critics and in some cases, their family members as well. This massive sweep includes opposition politicians, non-NDA politicians, their relatives and aides, activists, lawyers, independent media houses or journalists, members of the film fraternity and even government officials who questioned the ruling party’s conduct.

Conversely, only 39 individuals linked to the BJP or its allies have faced the heat of central agencies such as the Central Bureau of Investigation, Enforcement Directorate and Income Tax in the past seven years.

The category targeted the most is politicians — 257 in all, and their relatives and associates, 140.

The opposition party with the most number of cases is the Congress; 75 of the party have been targeted, followed by the Mamata Banerjee’s Trinamool Congress, 36 members of which have seen coercive action.

The Arvind Kejriwal-led Aam Aadmi Party is next, with cases against at least 18 of their members including Mr Kejriwal.

As this slide shows, virtually no non-BJP political party has been untouched by Central agency action in the past 7 years — from the Abdullah family and Mehbooba Mufti in Kashmir, to party colleagues and relatives of the DMK’s Stalin in the Tamil Nadu. 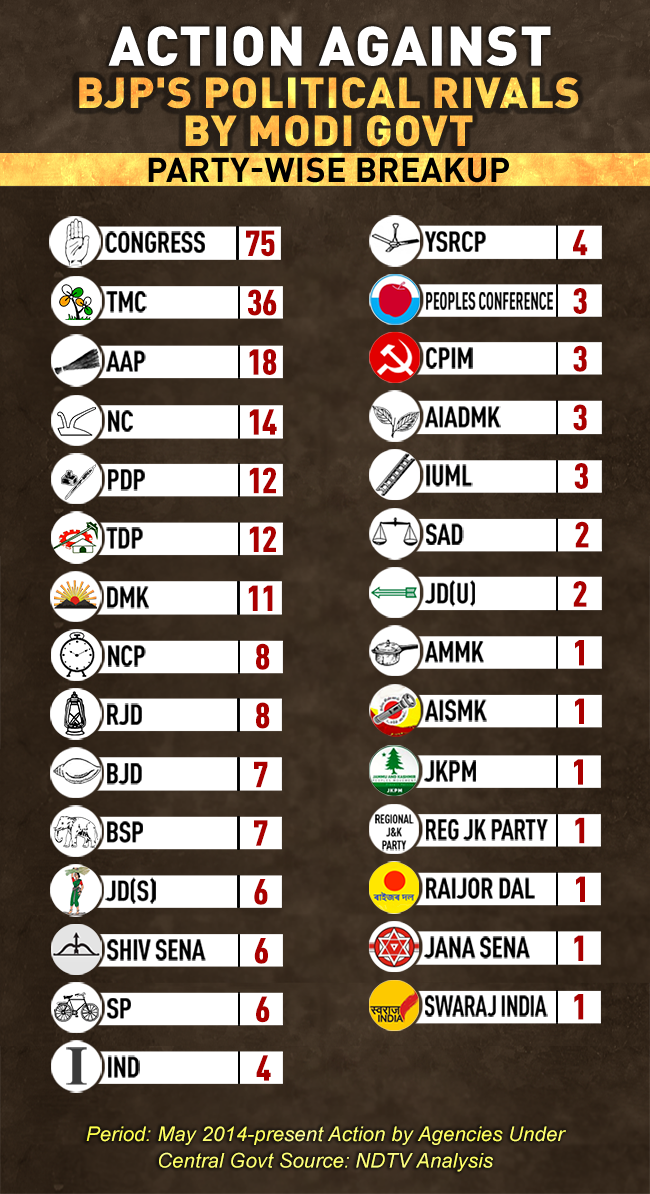 Apart from politicians and their relatives and aides, a wide swathe of government critics — 121 in all — have come under the scanner. From members of the film fraternity who have been vocal in their criticism of the government like Tapsee Pannu and director Anurag Kashyap, to bureaucrats like the tax cases against the relatives of Ashok Lavasa, the former Election Commissioner who gave dissenting opinions to the clean chits given to Prime Minister Modi and Amit Shah during the 2019 elections.

Droves of Left-leaning activists seen as opposed to the BJP, like Sudha Bharadwaj and the others accused in the Bhima Koregaon case, have also been booked or arrested.

29 media houses or journalists known for critical reporting on the government have also faced agency heat — the most recent being raids on UP-based media houses Dainik Bhaskar, a mass-selling newspaper, and Bharat Samachar, a Lucknow-based TV channel that stood out for their hard-hitting reporting of the second Covid wave in UP.

The 570 figure is a massive 340 per cent increase compared to similar action under the Congress-led UPA 2 government, under whose watch 85 individuals or groups seen as critical of the Congress were targeted by Central agencies, working out to an average of 17 cases per year, compared to 75 cases a year under the Modi government. 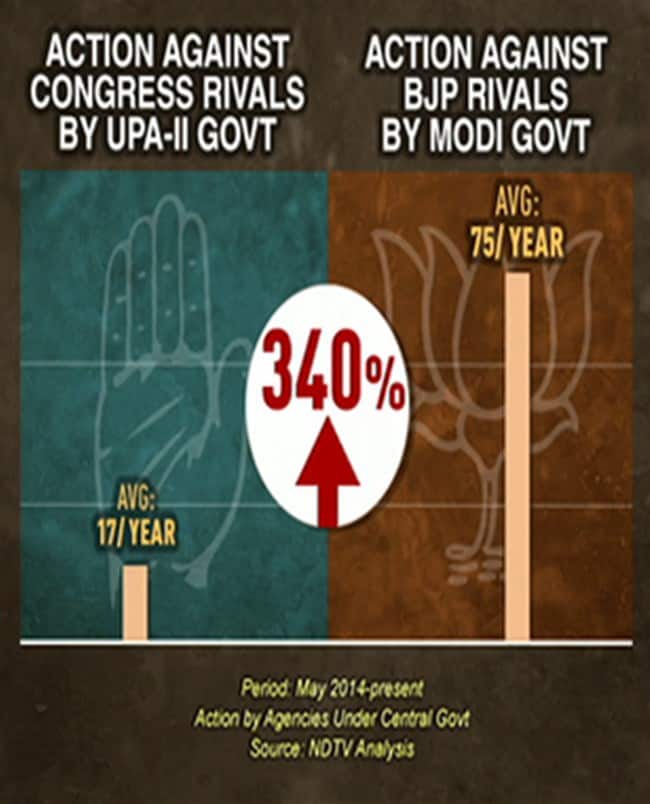 Under UPA-2, Central agencies seemed to act with more alacrity against the ‘home team’, taking action against 27 Congress members or party allies, a higher ratio compared to under the BJP.

The NDTV analysis, the culmination of an almost 3-month exercise, was compiled using public domain information on reported instances of action taken by Central agencies including CBI, ED, Income Tax, as well as Delhi Police, an agency controlled by the Centre and actions taken by the Centrally-run J&K Administration.

This is not an exhaustive list. Nor is this a comment on the merits of the cases.

While the use of investigative agencies to target government critics is not new, the huge spike of cases targeting mainly one side, with little to no action against the BJP or its allies, raise questions over the Centre’s claims that the actions are not politically coloured.

Further, fuelling the perception of ‘political’ raids is the propensity of Central agencies to intensify the targeting of the BJP’s rivals at crucial junctures, ahead of elections, for instance, or during political crises.

Just this weekend, aides of Akhilesh Yadav, the BJP’s main rival in poll-bound Uttar Pradesh, were raided by tax authorities.

Ahead of the West Bengal and Tamil Nadu elections earlier this year, Central agencies swooped down on at least 14 leaders, relatives and associates of the Trinamool Congress and of 8 the DMK, including raids on DMK chief MK Stalin’s daughter and son in law just four days before the polls.

Conversely, Central agencies have tended to overlook allegations of wrongdoing against BJP leaders at the Centre or in states. In Rajasthan and Karnataka, in 2020 and 2018, the Congress had released audio clips purportedly of the BJP attempting to bribe its legislators, including audio of an ex-BJP Chief Minister reportedly attempting to induce a Congress MLA, but no probe followed.

Just a few of months ago, at least two BJP politicians have publicly spoken of how entry into the ruling party guarantees “protection” from Central agencies.

Harshvardhan Patil, a former MLA from Maharashtra who had quit the Congress to join the BJP ahead of the 2019 state polls, said that he now gets “sound sleep as there are no inquiries.”

“He (referring to someone from the Opposition sitting next to him on stage) asked why did I join the BJP. I told him to ask his leader why I went to BJP. Everything is easy-going and peaceful (in BJP). I get sound sleep as there are no inquiries,” Mr Patil said while speaking at an event in Maval in Pune district, in October this year.

Just days later, Sanjay Patil, a BJP MP from Maharashtra, said at a public function in Sangli: “The ED won’t come after me since I am a BJP MP. We have to take a loan in order to purchase luxury cars worth Rs 40 lakh to show off. The ED will be surprised to see the amount of loan we have.”