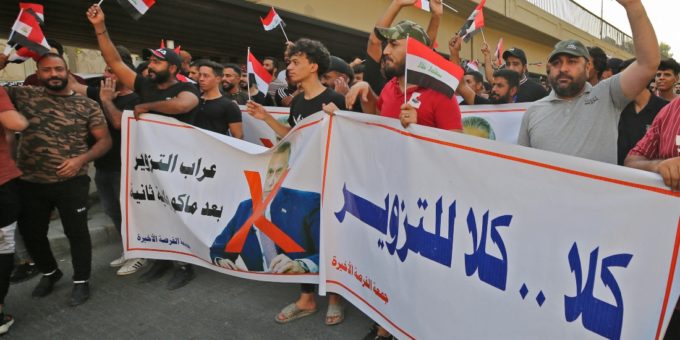 NEW YORK: The UN Security Council on Monday praised Iraqis for their commitment to democracy in the face of “dynamic security challenges,” and congratulated the Iraqi government and Independent High Electoral Commission for what it termed “a technically well-managed and generally peaceful election” in early October.

The council’s statement came in the wake of a report by UN Secretary-General Antonio Guterres on Iraq’s electoral process and the role played by the UN Assistance Mission for Iraq. The UN mission was praised by the council for its “objectivity” in supporting the government and IHEC in pursuit of “genuinely free and fair Iraqi-led, Iraqi-owned elections.”

Iraqis went to the polls last month to elect members of parliament amid protesters’ calls to stop endemic corruption and improve living conditions.

Following the elections, supporters of the Fatah Alliance — the coalition representing Iran-backed militias which lost two-thirds of its seats — claimed the poll was rigged and refused to accept the results, despite hundreds of international observers testifying to the integrity of the voting process.

The Security Council condemned “attempts to discredit the election,” deplored the use of violence to settle poll-related grievances, and called for any disputes to be addressed through “legal and peaceful means.”

“The members of the Security Council reiterated their condemnation of both the Nov. 7, 2021 assassination attempt against Iraqi Prime Minister Mustafa Al-Kadhimi and the persistent threats of violence against UNAMI, IHEC and others,” the council said in a statement.

Members also welcomed “the efforts of the government of Iraq, IHEC and UNAMI to promote women’s political participation.

The statement concluded: “Members of the Security Council look forward to the peaceful formation of an inclusive government which will deliver meaningful reforms to address the needs and aspirations of all Iraqis, including women, youth and marginalized communities. They reiterated their support for the independence, sovereignty, unity and territorial integrity of Iraq.”