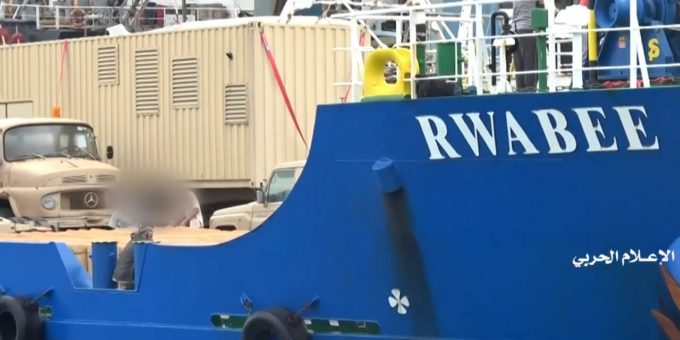 NEW YORK: The UN Security Council unanimously condemned the Houthi seizure and detention of UAE-flagged vessel Rwabee on Friday.
The cargo ship was seized by the militia in an Iranian-backed and planned operation from the Yemeni port of Hodeidah, the Coalition to Support Legitimacy in Yemen said.
In a statement drafted by the UK, the UN’s most powerful body demanded the immediate release of the vessel and its crew, urging the Houthis to ensure the crew’s wellbeing and safety until their release.
Security Council members also called on all sides “to resolve the issue quickly and underlined the importance of freedom of navigation in the Gulf of Aden and Red Sea, in accordance with international law.
The seizure of the UAE-flagged Rwabee ship on Jan. 3 by the Houthis coincided with a massive memorial in Tehran on the second anniversary of the US drone stroke that killed a top Iranian general, Qassem Soleimani, in Baghdad. The Houthis said they seized the ship off the coast of Hodeidah, Yemen’s main port, because it was carrying military equipment.
The Security Council “underscored the necessity of ensuring the crew’s safety and well-being until their release.”
On Thursday, the UN mission monitoring implementation of a cease-fire and the withdrawal of rival forces from Hodeida and the two smaller ports of Salif and Ras Issa tweeted that as part of its routine weekly patrol it visited the port of Salif and neighboring areas where its team “saw the Rwabee vessel from a distance and spoke to its crew members.” It gave no details.
The taking of the Rwabee marked the latest assault in the Red Sea, a crucial route for international trade and energy shipments.
Yemen has been engulfed in civil war since 2014 when the Houthis took the capital, Sanaa, and much of the northern part of the country, forcing the government to flee to the south, then to Saudi Arabia. A Saudi-led coalition that included the UAE and was backed at the time by the United States, entered the war months later, in 2015, seeking to restore the government to power.
The conflict has since become a regional proxy war that has killed tens of thousands of civilians and fighters. The war has also created the world’s worst humanitarian crisis, leaving millions suffering from food and medical care shortages and pushing the country to the brink of famine.
A statement from the Saudi-led coalition accused the Houthis of committing an act of “armed piracy” involving the Rwabee, and said the ship was carrying medical equipment from a dismantled Saudi field hospital in Yemen’s distant island of Socotra, without offering evidence.
After the Houthis showed video footage from the Rwabee of military-style inflatable rafts, trucks and other vehicles on the vessel and what appeared to be a collection of rifles inside a container, Saudi state television alleged the Houthis had transferred the weapons onto the ship.

Woman Dies After Being Pushed Onto Subway Tracks in Times Square

After Pushpa, Hindi dubbed version of Allu Arjun starrer Ala Vaikunthapurramuloo to release in cinemas on January 26, 2022 : Bollywood News
2022-01-17