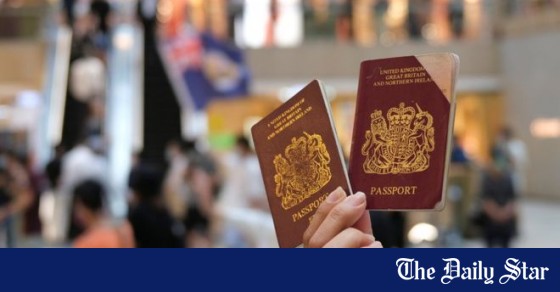 Britain will not walk away from the people of Hong Kong if China imposes a national security law that would conflict with its international obligations under a 1984 accord, Prime Minister Boris Johnson said today.

He repeated Britain’s pledge to give British National Overseas passport-holders in Hong Kong a path to British citizenship, allowing them to settle in the United Kingdom.

There are about 350,000 holders of BNO passports in Hong Kong and another 2.5 million are eligible for them, Johnson said.

The United Kingdom has urged China to step back from the brink over the national security legislation for Hong Kong that it says risks destroying one of the jewels of Asia’s economy while ruining the reputation of China.

“Hong Kong succeeds because its people are free,” Johnson wrote in the Times of London newspaper. “If China proceeds, this would be in direct conflict with its obligations under the joint declaration, a legally binding treaty registered with the United Nations.

“Many people in Hong Kong fear that their way of life – which China pledged to uphold – is under threat,” Johnson said.

China’s parliament approved last week a decision to create laws for Hong Kong to curb sedition, secession, terrorism and foreign interference. Mainland security and intelligence agents may, for the first time, be stationed in the city.

“If China proceeds to justify their fears, then Britain could not in good conscience shrug our shoulders and walk away; instead we will honour our obligations and provide an alternative,” Johnson said.

Hong Kong was handed back to China in 1997 after more than 150 years of British rule – imposed after Britain defeated China in the First Opium War.

China said its decisions on national security in Hong Kong were its own affair and that Britain’s link to the territory stemmed from “aggressive colonization and unequal treaties”.

“The UK’s irresponsible remarks and accusations…have grossly interfered in China’s internal affairs including Hong Kong affairs,” Chinese Foreign Ministry spokesman Zhao Lijian said. “We advise the UK side to step back from the brink.”

“The UK said the legislation is authoritarian, but this word is the exact characterization of the UK’s former rule over HK,” the spokesman said.

Hong Kong activists plan to rally to mark the June 4, 1989 anniversary of Chinese troops firing on pro-democracy student demonstrators in and around Beijing’s Tiananmen Square, even though for the first time, an annual vigil for the anniversary has been cancelled over concerns about coronavirus contagion.

Demonstrations are also planned for the June 9 anniversary of last year’s million-strong march against a now-withdrawn Hong Kong bill to allow for the extradition of offenders to mainland China, as well as protests three days later that police tackled with tear gas and rubber bullets.

Katrina Kaif and Vidya Balan in talks to star in a film together? :Bollywood Latest News
2019-10-15