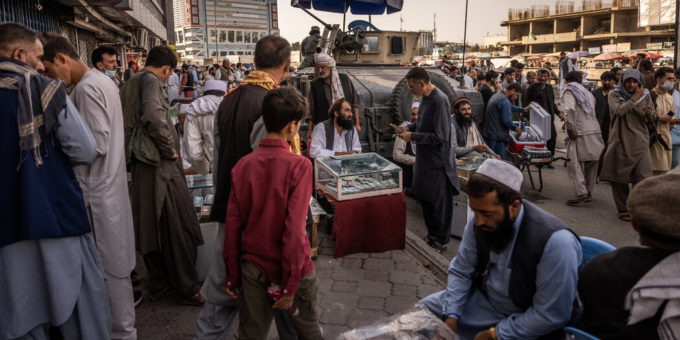 WASHINGTON — America’s war in Afghanistan is over, but the fight over the Taliban’s finances is only beginning.

The fate of billions of dollars of international reserves and foreign aid represents its own set of politically and legally fraught decisions as the world comes to grips with what Afghanistan will look like under Taliban rule. The stakes are extraordinarily high, as millions of Afghans face the prospect of becoming collateral damage from a stranglehold of sanctions on the Taliban that remain in place, threatening to sink an economy that the United States has spent two decades trying to prop up.

With a humanitarian crisis looming, the Biden administration is reviewing how to tailor that web of sanctions so that aid can continue to reach the Afghan people. The challenge is how to let donor money continue to flow without further enriching the Taliban, which the United States considers a terrorist organization. Experts say that such a situation, in which a group deemed to be terrorists takes over an entire country, is without precedent and poses a complex test for the United States’ sanctions program.

“This is a new world,” said Adam M. Smith, a senior sanctions official in the Obama administration’s Treasury Department. “I can’t think of any case in which a terrorist group that’s already designated became the power in charge of a full country.”

He explained that the Treasury Department must soon decide what exceptions, or licenses, it would grant for certain kinds of transactions. It must also determine whether all of Afghanistan, or only the Taliban leadership, remains under sanctions so that the world knows how to engage with the government.

“We need to find a way to encourage goods and services into Afghanistan, or you’re going to have 30 million Afghans having collateral consequences here and that’s going to be disaster,” Mr. Smith said.

As the Taliban swept to power last month, the United States swiftly acted to maintain as much leverage as possible. It blocked its access to $9.5 billion in international reserve funds and pressured the International Monetary Fund to suspend distribution of more than $400 million in currency reserves.

A Treasury Department official said that the United States was not easing sanctions pressure on Taliban leaders or the significant restrictions on their access to the international financial system. The militant group continues to be classified as a specially designated global terrorist group, and they are also under United Nations sanctions, which the United States and other countries must enforce.

But a desire to demonstrate some flexibility is already apparent. In the past week, the Treasury Department has signaled to humanitarian organizations that it is taking steps to permit aid work that benefits the Afghan people to continue. On Aug. 25, the agency issued a specific license, similar to what it has issued in places like Syria and Venezuela, to allow for the delivery of food, shelter, medicine and medical services to Afghanistan.

There are also signs that financial flows into the country, which have been shut off for the past two weeks, are resuming.

Financial institutions in the United States have been waiting for the Biden administration to clarify whether the property of Afghanistan is considered the property of the Taliban, banking industry officials said. Banks are concerned that they could be in violation of U.S. sanctions if they facilitate transactions with the country.

But Western Union said on Thursday that it is resuming money transfer services into Afghanistan so that its customers could send money to loved ones and that it would waive fees for wiring money into the country for two weeks. A company spokeswoman said that it made the decision after the United States government indicated that remittances to Afghanistan were permissible.

Also, Taliban representatives, through their Twitter accounts, confirmed the reopening of the Sarai Shahzada, a money market in Kabul.

A Treasury Department official confirmed that the agency had contacted financial institutions to relay that personal remittances were allowed.

The Treasury Department does have experience trying to allow help to reach populations that are ruled by hostile governments and has issued licenses for humanitarian aid to arrive to such places. In June, it issued licenses allowing supplies for combating the coronavirus to be shipped to Iran, Syria and Venezuela.

A terrorist group presents its own challenges, however, and keeping aid money out of the hands of the Taliban will not be easy, especially if they control the country. The group is notorious for pilfering the wealth of Afghanistan’s citizens with exorbitant taxes, and an influx of food or medicine from abroad would be an opportunity for seizing and selling them to raise funds. Strict sanctions could also compel the Taliban to rely even more heavily on illicit finance and the drug trade, despite their public disavowal of such practices.

“There needs to be greater engagement on anti-money-laundering and countering the financing of terrorism because of the heightened risk posed by the Taliban takeover,” said Alex Zerden, the Treasury Department’s financial attaché at the U.S. Embassy in Kabul from 2018 to 2019.

Understand the Taliban Takeover in Afghanistan

Who are the Taliban? The Taliban arose in 1994 amid the turmoil that came after the withdrawal of Soviet forces from Afghanistan in 1989. They used brutal public punishments, including floggings, amputations and mass executions, to enforce their rules. Here’s more on their origin story and their record as rulers.

Who are the Taliban leaders? These are the top leaders of the Taliban, men who have spent years on the run, in hiding, in jail and dodging American drones. Little is known about them or how they plan to govern, including whether they will be as tolerant as they claim to be. One spokesman told The Times that the group wanted to forget its past, but that there would be some restrictions.

The complexity of addressing the situation in Afghanistan comes as the Treasury Department conducts a broader review of its sanctions program. Critics have faulted the previous administration for haphazardly imposing sanctions, often undercutting their effectiveness. The Biden administration has said that it is not conducting an intelligence review of specific sanctions, but rather focusing on ways to modernize the practice so that it is more effective.

The Treasury Department has offered no timeline for that review. It is taking place as Republicans in the Senate have stalled two of President Biden’s nominations for top sanctions roles in the Treasury Department, Brian E. Nelson and Elizabeth Rosenberg. Although the Biden administration has been less vocal than the Trump administration about its use of sanctions, it is still on pace to make about 1,000 designations this year, according to the law firm Gibson, Dunn & Crutcher.

Any sanctions relief for the Taliban could come with a political price.

Senators Marco Rubio of Florida and Rob Portman of Ohio, both Republicans, urged Treasury Secretary Janet L. Yellen on Monday to keep any internationally held assets belonging to Afghanistan from the Taliban.

“The Taliban are sponsors of terrorism who maintain close ties with Al Qaeda, and therefore they cannot be trusted to distribute money to the Afghan people who desperately need it, and will instead use any and all funds to actively advance priorities hostile to U.S. interests,” they wrote in a letter. “We can and should work to establish alternative means of supporting the Afghan people, but we cannot allow any resources to be used to bolster an oppressive Taliban regime.”

Khalid Payenda, who resigned last month as Afghanistan’s finance minister, said on Thursday during an event at Georgetown University’s School of Foreign Service that the Taliban appeared to be struggling to restart the government’s financial operations and that the country would soon run out of money. He said that the world must find ways to give economic support to the people of Afghanistan without giving the money to the Taliban and that sanctions needed to be maintained as leverage.

“I think giving full access to reserves would be catastrophic,” Mr. Payenda said, accusing the Taliban of still having ties to Al Qaeda. “The Taliban know that they cannot run a government without the finances and technical assistance that comes from other countries.”

The White House made clear this week that it would not prematurely let go of any economic leverage over the Taliban. Biden administration officials insisted that such leverage would be important to ensure that the Taliban stick to their commitments to let Americans, permanent residents and Afghan citizens holding special immigrant visas to leave the country.

“When we’re talking about Afghan reserves, Afghan access to the banking system, Afghan access to any kind of fundamental operation of the economy, think about the fact that the United States has basically been the steward of this for the last 20 years,” Jake Sullivan, the White House’s national security adviser, told CNN.

Afghanistan: Fate of Panjshir Valley in balance amid heavy fighting

Hrithik Roshan urges coronavirus survivors to donate blood; Chiranjeevi donates blood and urges all to do the same  : Bollywood News
2020-04-20