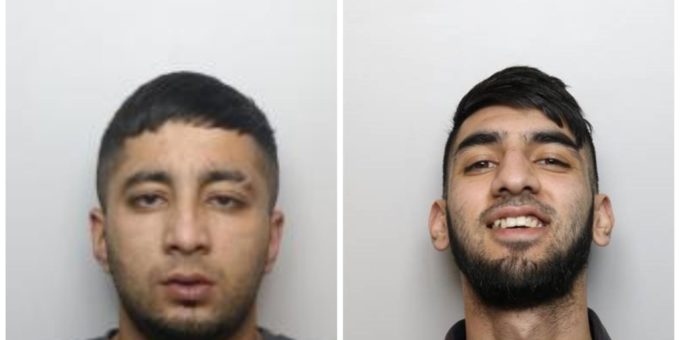 TWO men found guilty of attempted murder have been jailed for nearly 50 years for a shooting and a robbery in which the victim was threatened with a gun.

Zeshaam Khan, 23, and Khawaar Awan, 21, both of Bradford, were both convicted at Leeds Crown Court on April 14 this year following a shooting in Britannia Gardens, Pudsey.

The court heard officers were called to the property at 12.14am on June 10, 2018 to reports of two masked men having fired two guns.

At the time of the shootings there were people inside, but no one was injured.

No one was present when officers arrived, but evidence was found of the guns being fired.

They were also found guilty of the robbery – at business premises close to Maharaja Fabrics in Cemetery Road, Bradford, at 7.30pm on Sunday, December 9, 2018.

The victim was entering the premises with a large amount of cash when he was chased back inside.

He was then assaulted and threatened with a gun before the suspects fled with the money. A second man also suffered minor head injuries after being assaulted.

He said: “The shooting in Pudsey and the subsequent robbery caused considerable and understandable concern in the local community, but I am pleased to say that the two offenders have now been brought to justice.

“The thorough and detailed investigations into what happened and the subsequent extended sentences these two have received show that such incidents will not be tolerated.

“Officers working on Programme Precision, assisted by colleagues in Districts and wider partners are working together to prevent serious and organised crime from happening in the first place and then bringing offenders to justice when it does.

“Thankfully no one was injured during the shooting in Pudsey, but it was a very distressing time for the people inside. Likewise, the robbery in Bradford was a very traumatic experience for the victim.

“I hope that the lengthy sentences handed down to these two will bring some closure to and help to reassure the communities we serve that this level of criminality will not be tolerated.”

Hamza Shah, 20, of Gaythorne Terrace, Bradford, admitted a charge of assisting an offender in relation to the robbery, and was given a community order at court yesterday.