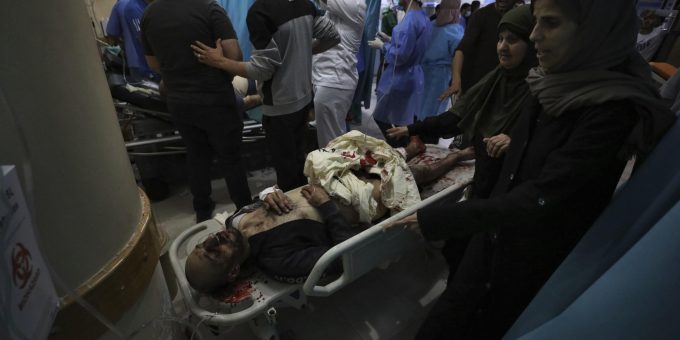 Twenty people including nine children have been killed in the Gaza Strip according to Palestinian health officials.

The death toll made it one of the bloodiest days of fighting in several years.

The Health Ministry did not provide a breakdown on the cause of the deaths, but at least seven members of one family, including three children, were killed in an explosion in northern Gaza.

The Israeli military said it struck a number of Hamas targets in response to rocket fire out of Gaza, claiming eight militants were struck.

The barrage started after hundreds of Palestinians were injured in clashes with Israeli police at a flashpoint religious site in Jerusalem.

The early evening attack on the disputed holy city escalated already heightened tensions throughout the region following weeks of confrontations between Israeli police and Palestinian protesters that have threatened to become a wider conflict.

Israeli prime minister Benjamin Netanyahu warned of an open-ended operation against Gaza’s Hamas militant rulers, accusing them of crossing a “red line” with the latest rocket fire, and promising a tough response.

“Whoever attacks us will pay a heavy price,” he said, warning that the fighting could ”continue for a while”.

The Israeli military said more than 50 rockets were fired into Israel throughout the evening, most of them aimed at southern Israeli towns near the border.

Lieutenant Colonel Jonathan Conricus said six rockets were aimed at Jerusalem, 60 miles away. It was believed to be the first rocket attack on the city since a 2014 war.

Shortly after the sirens sounded, explosions could be heard in Jerusalem. One rocket fell on the western outskirts of the city, lightly damaging a home and causing a brush fire.

The Israeli army said an Israeli civilian in the country’s south suffered mild injuries when a vehicle was struck by an anti-tank missile from Gaza.

Abu Obeida, spokesman for Hamas’s military wing, said the attack on Jerusalem was a response to what he called Israeli “crimes and aggression” in the city.

“This is a message the enemy has to understand well,” he said.

He threatened more attacks if Israeli forces re-enter the sacred Al-Aqsa Mosque compound or carry out planned evictions of Palestinian families from an east Jerusalem neighbourhood.

Tensions at the site have been the trigger for prolonged bouts of violence in the past, including the last Palestinian uprising.

The UN Security Council held emergency consultations on Monday on the escalating violence in east Jerusalem and is considering a proposed statement calling on Israel to cease evictions and calling for “restraint” and respect for “the historic status quo at the holy sites”.