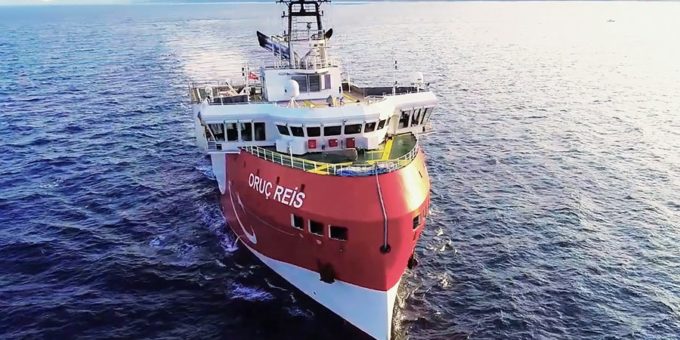 ANKARA: A Turkish seismic survey vessel returned to port from its gas exploration activities in the disputed waters of eastern Mediterranean on Monday morning, in a last-minute “goodwill gesture” to open room for negotiation with Greece and Cyprus in the coming days.

The presence of the Oruc Reis in the area since Aug. 10, where it has explored for potential natural gas reserves, has been at the heart of a dispute between Ankara, the EU and US.
EU leaders will decide during a Dec. 10-11 summit potential sanctions over Ankara’s activities, which Greece has called a “direct threat to peace.”
The vessel was spotted sailing just seven miles off the coast of the Greek island of Kastellorizo on Thursday.
However, Ankara still maintains that it has rights in the region due to its long Mediterranean coastline. Tensions escalated back in August when Turkey sent the vessel into waters also claimed by Greece, which has so far rejected any talks with Turkey over its maritime claims as long as the Oruc Reis remained in the area.
The Turkish Energy Ministry also announced that the ship had collected “2D seismic data of 10.955 kilometers” (7,000 miles) during its excursion.
Gallia Lindenstrauss, senior research fellow at the Institute for National Security Studies, said the Oruc Reis’s return to port was likely linked to the coming meeting of the European Council as an attempt to alleviate the situation and avoid sanctions, rather than a sign of genuine desire for negotiations.
“The decision whether or not to impose sanctions on Turkey depends very much on the position of Germany. As there are strong economic ties between Turkey and Germany and also a very large Turkish diaspora in Germany, Berlin has tried to mediate between Ankara and Athens,” she told Arab News.
Lindenstrauss added, though, that two incidents may have shattered some of the goodwill toward Ankara in Berlin.
“The first was the re-sending in October of the Oruc Reis to what Greece sees as its economic waters, while German mediation efforts were in play. The second, at the end of November, was the strong negative reaction of Ankara to what happened when a German navy crew searched a Turkish cargo ship on suspicion that it violated the arms embargo on Libya, as Berlin thought the search was completely legal under the mandate of the Irini operation,” she said.
Last week, the European Parliament called for sanctions against Turkey over President Recep Tayyip Erdogan’s visit to Northern Cyprus, and Turkey’s continuing operations in the Eastern Mediterranean, which Brussels says are illegal.

Gallia Lindenstrauss, senior research fellow at the Institute for National Security Studies, said the Oruc Reis’s return to port was likely linked to the coming meeting of the European Council as an attempt to alleviate the situation and avoid sanctions, rather than a sign of genuine desire for negotiations.

During his daily press conference on Monday, Peter Stano, the lead spokesperson for the external affairs of the EU, said Brussels could not take steps based on a single statement or move, and added that the manners and statements given throughout this period would be taken into account w during the summit.
“It is a cat and mouse game,” said Fiona Mullen, director of Cyprus-based Sapienta Economics.
“We can assume that the EU expected Oruc Reis to return to port before the summit. But there has been no change on Varosha or the Cyprus Exclusive Economic Zone, so the EU will have to word the conclusions carefully to make sure any threat of sanctions remains credible,” she told Arab News.
According to Charles Ellinas, a senior fellow and energy expert at the Atlantic Council, given what happened in September when Oruc Reis was pulled back, only to return mid-October after the special European Council meeting on Oct. 1, it is difficult to take this new development at face value.
“Based on the previous experience, it looks as if Oruc Reis’ return to base may be linked to the forthcoming European Council meeting on Dec. 10, which will consider EU sanctions on Turkey. This time round, though, the EU may not take the bait. Sanctions are still likely,” he told Arab News.
Sanctions that specifically target hydrocarbon-related areas of Turkey’s economy are likely to be taken during the summit, experts note.
“The EU will also demand firmer commitments from Turkey — to stop activities in the disputed areas to enable resumption of discussions with Greece,” Ellinas said.
However, the withdrawal of Oruc Reis may also be linked to the change of presidency in the US.
“Erdogan has already started making conciliatory remarks towards the US and the EU — such as ‘Turkey is part of Europe’ and ‘Turkey-US relations are of a strategic nature,’ following Joe Biden’s election,” Ellinas said.
But, the energy expert added, remarks alone may not be enough.
“There will be a need for a reset and a willingness by Turkey to cease aggression and return to diplomacy and negotiations, without the threat of intimidation,” he said.

Kartik Aaryan brings out his action avatar as he makes his debut in the Brawl Universe : Bollywood News
2021-06-20