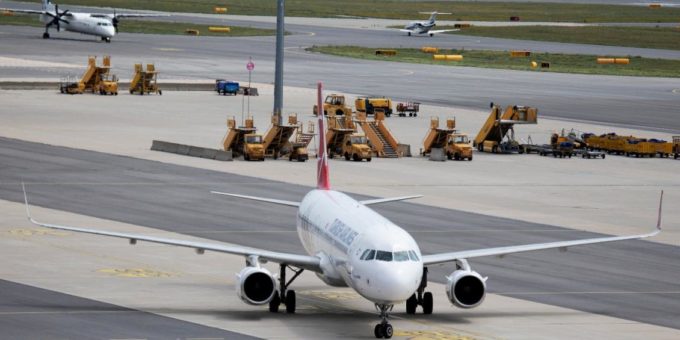 ANKARA: Turkey banned Syrian, Yemeni and Iraqi citizens from flights to Minsk on Friday, potentially closing off one of the routes used by migrants that the EU says have been flown in by Belarus to create a deliberate humanitarian crisis on its frontier.
Thousands of migrants, mainly from the Middle East, are sheltering in freezing conditions in the woods on the frontiers between Belarus and the EU states Poland and Lithuania, which are refusing to let them cross. Some have already died and there are fears for the safety of the rest as bitter winter conditions settle in.
The European Union accuses Belarus of creating the crisis as part of a “hybrid attack” https://www.reuters.com/world/russia-flies-nuclear-capable-bombers-over-… on the bloc – distributing Belarusian visas in the Middle East, flying in the migrants and encouraging them to try to cross the border illegally. Brussels may impose new sanctions on Belarus and airlines it blames for ferrying the migrants, as soon as Monday.
Belarus denies that it manufactured the crisis, but has also said it cannot help resolve it unless Europe lifts earlier sanctions, which the EU imposed to punish President Alexander Lukashenko for a violent crackdown on mass street protests against his rule in 2020.
Lukashenko, a close ally of Russia, threatened this week to cut off Russian gas supplies to Europe through pipelines across Belarusian territory. On Friday, the Kremlin appeared to distance itself from that threat, saying it was not consulted in advance of Lukashenko’s remarks and that it would fulfil its gas delivery contracts.
European officials have repeatedly said their best hope of resolving the crisis at the frontier is to stop would-be migrants in the Middle East from boarding flights for Belarus in the first place.
Turkey has denied playing a direct role by allowing its territory to be used to ferry in migrants. But Minsk airport’s website listed six flights arriving from Istanbul on Friday, the most from any city outside the former Soviet Union.
Turkey’s Civil Aviation General Directorate (SHGM) said on Friday it would ban the sale of tickets on flight to Belarus to citizens from Syria, Iraq and Yemen. The Belarusian state-owned airline Belavia said it would comply with the request.
“In relation to the illegal border crossing problem between the European Union and Belarus, it has been decided for citizens from Iraq, Syria and Yemen wanting to travel to Belarus from our country’s airports not to be sold tickets and not to be allowed on planes,” the SHGM said on Twitter.
European Commission Vice President Margaritis Schinas welcomed the Turkish move.
EU foreign ministers may approve more Belarus sanctions on Monday that could include individuals and companies, according to one diplomat.
The bloc’s executive commission said airlines that bring migrants would be on the list, and two diplomats said the main airport in Belarus was also being considered.
Polish authorities stopped two groups of migrants from crossing the border from Belarus late on Thursday, private broadcaster TVN24 quoted local police as saying, marking a relatively quieter day in a week of tense confrontations.
The Polish Border Guard said on Friday on Twitter there had been 223 attempts to illegally cross the border on Thursday.
Two incidents in the evening involved larger groups – one near Kuznica Bialostocka where the Belarusian army tried to push some 35 people, mostly women and children, to the Polish side, and another including a group of around 100 migrants near Polowce, the local police said.
The Polish border guard said the number of migrants alongside the two countries’ border had risen to around 3,000-4,000.
Presidents of Lithuania, Latvia and Estonia will meet on Monday in Vilnius to discuss the crisis and be joined by video link by Poland’s president Andrzej Duda, the Lithuanian president’s office said on Friday.

Meanwhile, Iraq said on Friday it was drawing up lists of those among the hundreds of Iraqis blocked on the border between Belarus and Poland who wish to be repatriated voluntarily.
“We are ready to organise more than one trip to provide an urgent response to anyone wanting to come home voluntarily,” foreign ministry spokesman Mohammed al-Sahaf said.

Iraq has sent diplomats from Moscow and Warsaw to the border to “check on (the migrants’) safety and communicate with the relevant authorities,” Sahaf said.
The Belarusian diplomatic missions in Baghdad and in the Kurdistan regional capital Arbil, which had been providing Iraqis with tourist visas, were “temporarily closed” last week, he added.
Iraqi Airways indefinitely suspended its service between Baghdad and Minsk in August, airline spokesman Hussein Jalil said.
“But we have received authorisation to operate one-way flights between Minsk and Baghdad for Iraqis blocked” in Belarus, he added.
In recent weeks, would-be migrants have been forced to fly through third countries, usually Turkey, to reach Belarus.

Cobalt Blue trailer: Prateik Babbar is at the centre of a love triangle with a brother and sister at opposite ends