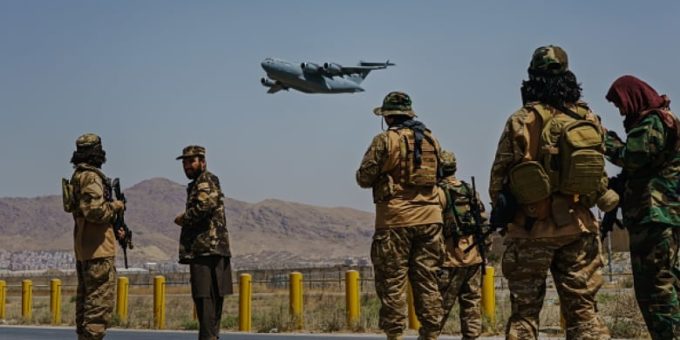 ANKARA: Turkish Foreign Minister Mevlut Cavusoglu announced on Monday that a Turkish and a Qatari company would jointly put forward a proposal to the Taliban to run five airports in Afghanistan for their approval “if conditions are favorable.”

A busy week awaits the technical delegations as one group of experts is expected to travel to Doha first, before heading to Afghanistan to discuss details for operating Kabul airport — a key point to channel humanitarian aid to Afghan civilians — and reopening it for international travel.

Experts underline that Turkish and Qatari involvement in the running of the airports will help the Taliban to maintain their links with international actors and evade international isolation, while Ankara will also use its Afghanistan card to repair ties with Washington and to have a foothold in regional geopolitics.

In the meantime, Turkish and Qatari delegations, which already signed a joint agreement on operating the airports in Afghanistan, will make joint proposals to the Taliban, which will be discussed on Wednesday.

Turkey was initially offering to operate Hamid Karzai International Airport in Kabul with technical and security assistance, but questions remain unanswered about why the initial plan changed and the benefits of this proposal for regional security and channeling of humanitarian assistance.

On Sunday, Cavusoglu met with the acting Taliban Foreign Minister Amir Khan Muttaqi on the sidelines of the Organization of Islamic Cooperation meeting in Islamabad to discuss the airport issue.

“As the Taliban succeeded in taking over Afghanistan militarily, and the Doha peace process became dead, now the Taliban are interested to increase their capability to govern, but they lack legitimacy both internally and internationally,” Zalmai Nishat, a research fellow at the Asia Center at the University of Sussex, told Arab News.

“The Taliban may have requested the operationalization of these airports in the western, northern, southern and central parts of Afghanistan. The lack of capacity in these airports is a key problem and Turkey can fulfill it with its much-needed technical expertise,” he added.

However, Nishat underlined that during the new round of negotiations with the Taliban, Turkey should devise its own Afghanistan policy and must use its stature and prestige to ensure democratic representation of all ethnic, sectarian communities and political factions of Afghanistan.

With its non-combatant role in the country over the years, Turkey established connections with diverse segments of Afghan society, including the Taliban.

The Turkish government insists on including some Turkic figures from minority groups — like Turkmen and Uzbeks — as well as women in Afghanistan’s new Cabinet.

“By helping run the airports, Ankara is eyeing getting an influential foothold in Afghanistan, to help achieve its broader goals in the region,” Galip Dalay, a fellow at the German Institute for Security and Policy Affairs, told Arab News.

“All regional powers already had their roles in Afghanistan and establishing a meaningful influence in the operationalization of the airports is the only area that Turkey can currently occupy,” he added.

However, for Dalay, Ankara is likely to bring to the negotiation table the “security” role that it wants to assume in the airports of Afghanistan.

“Qatar is willing to share responsibilities with Turkey on this issue because it doesn’t have enough skills to handle the security of the airports,” he said.

Dalay also noted that the Taliban and Ankara would find a middle ground for the security role at the airports without being restricted with the technical or civilian roles.

“The Taliban are currently in economic and political isolation at the international sphere and they will be open to any offers to break it. At that point, a Turkish private contractor can assume the security role at the airport, and thereby Turkey will gain leverage in its relations vis-à-vis the Biden administration and the EU with this new responsibility as it will both open humanitarian aid channels to the country and help manage the migration flows to Europe,” he said.

On Monday, Cavusoglu said a Turkish and a Qatari company had signed a memorandum of understanding for running five airports in Afghanistan, including Hamid Karzai, but did not name the other four.

Britain Offers $1.3 Billion in Aid to Hospitality and Leisure Sector